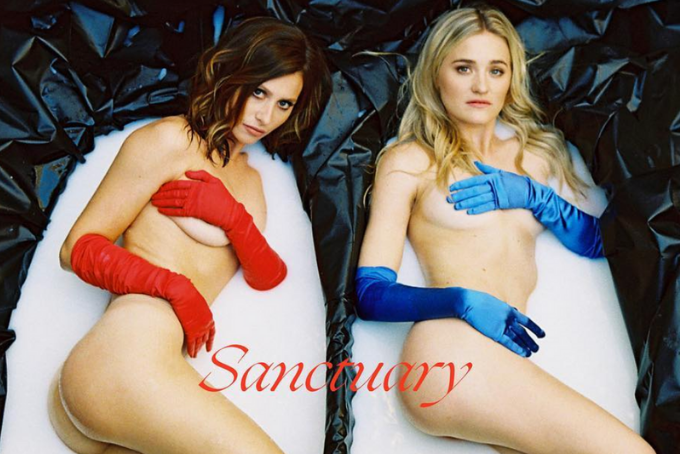 Sister duo Aly & AJ have cultivated a new kind of pop. After their epic comeback in 2017, releasing the 80s dream-pop hit “Take Me,” they set the tone for a new beginning. They recently unveiled their second EP Sanctuary, a seductive but bubbly masterpiece.

They preach about doing bad things on the ironically titled “Church,” intertwining synth beats with innocently pleading lyrics. It’s a far cry from the Disney stars we became accustomed to back in the early 2000s. It transitions to the heavenly “Don’t Go Changing,” whispering sweet nothings of self-love. The pair revealed the track was a reminder to stay true to one’s self, saying, “Everyone needs a song that reminds them that they’re unique and beautiful just the way they are. We touched on themes like this a lot during past records and we feel it’s important to spread this kind of love and positivity to our fans. Changing isn’t always for the better.”

Continuing their odes of unrelenting power, Sanctuary‘s third track “Star Maps” is meant for those raging against Hollywood’s patriarchy. “We wrote this song in 2017 when the Harvey Weinstein story broke as an ode to the #MeToo movement,” said Aly & AJ. “We felt we needed to write a revenge song for the innocent victims of Hollywood’s abusers.” It delivers a sense of power—they croon about burning houses to the ground and taking control, a true testament to a woman’s place in the world, especially in the age of #MeToo and #TimesUp.

“Not Ready to Wake Up” speaks to the hopeless romantics, clinging to the honeymoon stage of a relationship. It’s pop perfection at its finest, reminiscent of a classic 80s rom-com—we’re thinking Pretty In Pink.

The EP’s title track closes out the duo’s synth-pop journey. Like everyone in this world, Aly & AJ search the world for some kind of home. Aptly titled “Sanctuary,” the track is a dutiful thank you to whoever offers a safe place to those seeking it out. The song is wrapped with warmth and comfort, allowing reassurance to lost hearts. It’s a suitable title for an EP that showcases a great amount of growth.

Sanctuary EP is available now on all platforms! Thank you for your sanctuary 🙏

Aly & AJ have come a long way—we’ve witnessed their rise from teen Disney stars to rising pop royalty. With Sanctuary, they’ve unleashed a whole new range of talent that we always knew they were capable of.