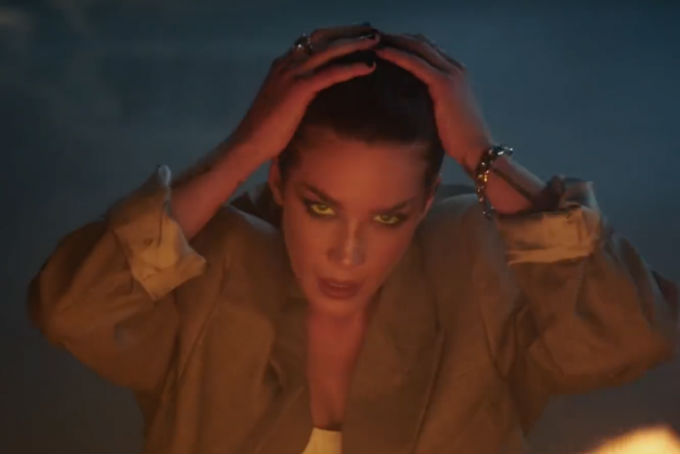 Halsey is back with her latest single, “Nightmare.” The “Without Me” singer officially began this next era by playing two sold-out shows at the iconic Webster Hall in New York City to celebrate the venue being reopened. On the first night she played her debut 2015 album Badlands in its entirety, and the next night she played 2017’s Hopeless Fountain Kingdom.

back to the Badlands for Night 1 of my series for @WebsterHall tonight we enter the Kingdom. I love you. 📷: @DonsLens pic.twitter.com/DseQ3oo5gq

The liberating track shows Halsey’s position as a powerful woman in the music industry, and the struggle of being just that. She sings about how men want her to smile more and how sometimes she just wants to cut her stomach off.

The track’s music video shows women being powerful, liberated and themselves, with Halsey surrounded by flames, fights and even getting her mugshot taken. The pop sensation’s outfits in the video are incredible as well, from a latex suit and being tied up in ropes to looking like a pin-up in cheetah print.

C’MON LITTLE LADY GIVE US A SMILE. NIGHTMARE by @halsey out on 5.17. If you’re in the LA area make sure to check out the mural on Melrose Ave. 🖤 pic.twitter.com/5bAf4AxplY

The track encapsulates the anger women are feeling right now with the restrictive abortion laws that recently passed in Alabama — and with near-perfect timing.

Halsey herself has been through plenty in her short life. From sexual assault to putting a diaper on and performing while she was having a miscarriage, the singer has publicly shown the nightmares she’s experienced in her own life. Halsey has struggled, but the track proves she’s not giving up on herself, the fans or the fight.

The pop star confirmed she isn’t touring just yet, but an album is definitely in the works. She’s been going through 2019 strong, with her two collaborations on “11 Minutes” with YUNGBLOOD and Travis Barker, and lending her vocals on BTS‘ “Boy With Luv.”

You can watch Halsey’s moving music video for ‘Nightmare’ here: