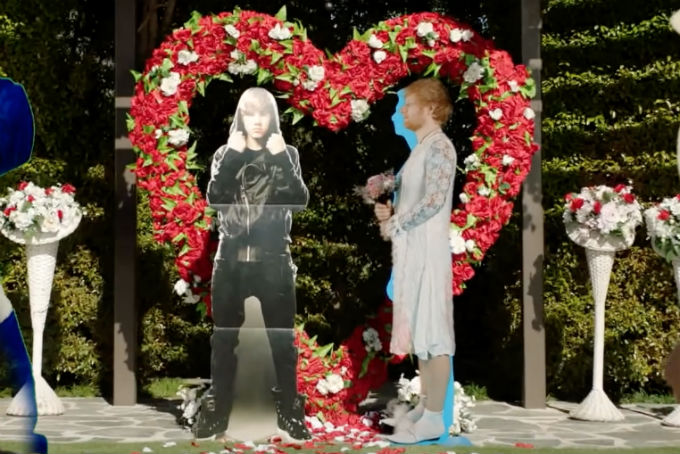 “I Don’t Care” has been playing on radio stations everywhere, and just last week Ed Sheeran and Justin Bieber released the music video for the catchy summer hit. But is the video just as hype as the track? Some people loved it, some not so much — but everyone can agree that the music video is one that everyone will certainly remember.

Filled with a wide variety of costumes, random shots of completely different videos, and the obvious green-screen as the main prop, this video has to be one of the most random ones yet. Sheeran and Bieber took the song’s concept of not being able to fit in or connect with anyone or anything aside from their other half, and turned it into a video that portrays the exact same message.

The video opens with the “Shape of You” crooner sitting in the middle of a fancy restaurant in front of an obvious green-screen alone, before glitching over to him in front of a cartoonish background in a full-on panda suit. Chilling at the pool with floating eyeballs in the background and a woman playing tennis with a cat head, this video gets even weirder as it goes on.

Bieber appears next floating in on a cartoon magic carpet as he sings his verse in the new song. Then the scene quickly switches to banana suits, corn stalk costumes and flying horses.

This is a super fun and playful video that has you waiting for what comes next, and it’s seriously so entertaining that we’ve been watching it on repeat. If anything, it only made us more curious about what we can expect from the two male pop stars in the future.

Take a look at the video and let us know what you think in the comments below, or tweet us @soundigest!