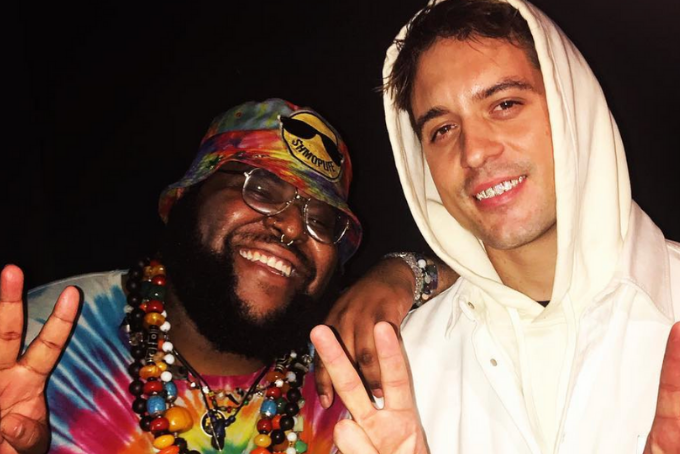 It’s officially Gemini season, and G-Eazy couldn’t have said it better himself: “I’m a crazy f*ckin’ Gemini.” In celebration of this Gemini’s 30th birthday today, we compiled a list featuring 15 of the BEST G-Eazy collabs ever!

Since the early days of his career, G-Eazy has highlighted his universal talent by successfully enmeshing his flow with other artists’ style. From dabbling with different samples to stepping in the studio with his mentors and peers, G-Eazy has built up an impressively diverse network of artists and producers. Throughout the decade span of is career, the rapper has curated a discography that includes some legendary collaborations.

15. “Girls Have Fun” by Tyga (featuring G-Eazy and Rich The Kid)

Released in February of this year, Tyga, G-Eazy and Rich The Kid knew exactly where this song would go. The single was an instant hit between the artists’ three fanbases and trailed its way into becoming a hit for the 2019 college spring break season. This single was meant to be fun and lighthearted, which is exactly what we would expect from this collab.

There’s something that’s wickedly soothing about this track. The combination of Post Malone‘s “sad boy” vocals and G-Eazy’s smooth flow sets a melancholy tone in this song. “Same Bitches” addresses the dark side of Hollywood that many celebrities fail to acknowledge until years after fame has sunk in. Both rappers walk us through navigating feelings of love, lust and disappointment.

You can’t disagree that the beat to “1942” is infectious. G-Eazy creates yet another party anthem with his close friends Yo Gotti and YBN Nahmir who have both toured with him in the past. This collaboration depicts a feel-good vibe and gives G-Eazy another reason to #flex. Believe it or not, the title “1942” is a reference to a brand of tequila made by Don Julio. Surprise, surprise!

What’s more catchy than the chorus, “Don’t get hurt // Turn around and throw it in reverse?” This song reflects the tempting “bad boy” persona of G-Eazy, and when combined with Vic Mensa‘s clever verses, the two create a hype track perfect for dancing at the club.

“Forbes” was definitely a change of pace for G-Eazy. Earlier in his career, the rapper was known for creating chill beats and feel-good verses. However, this collaboration with Borgore marked a new wave for the rapper. This was one of his first trap/dubstep collaborations that resulted in great success. Borgore’s electronic beats bring out a more wild, aggressive side of G-Eazy, and we love it!

Everyone had been waiting for this collaboration for literal years, and by everyone, we mean the shared fanbase of G-Eazy and Logic. Both rappers’ career started to pop-off around the same time, and ever since then, fans have compared their music. The two even shared The Endless Summer Tour back in 2016 but never set foot onstage together. Finally, after years of patient waiting, G-Eazy made his first appearance with Logic on his brand new album Confessions of a Dangerous Mind.

“Drop” was a somewhat predictable single that was released in the late summer of 2018. The song has a strong and exciting presence with the contribution of Black Youngsta and BlocBoy JB. The collaboration of these three rappers takes “Drop” to a whole new level.

Any true fan of G-Eazy knows that he often discusses a split identity within his music. The opening verse on his most recent album The Beautiful & Damned is “every seen a devil with a halo?” indicating that he has struggled to grasp exactly who he should be. Even earlier in his career the rapper has brought up the concept of fame changing his persona. For example, in an independent SoundCloud release “Achievement” he swears he’s “still the same Gerald, half killer, half nerdy.” In the closing of his most recent album, G-Eazy summarizes the story to fame and questions where he will go from here. The final track “Eazy” features a sample from Son Lux’s song “Easy.” G-Eazy raps “this game is not easy,” making use of his alias for a clever play on words. The eerie sounds of Son Lux polishes off the The Beautiful & Damned with a creepy twist.

“Of All Things” sits as track six on the rapper’s sophomore album When It’s Dark Out. This collaboration with Too $hort was a huge step in G-Eazy’s career because it emphasized his love and support for the Bay Area, where both artists are from. Too $hort has the reputation of being one of the pioneer rappers of West Coast hip-hop, making this collaboration a huge achievement for G-Eazy.

Where do we begin? The combination of G-Eazy and Marc E. Bassy’s vocals is something like no other. The two artists have quite a few collaborations together, but this one is by far the catchiest. “Some Kind of Drug” tells the story of falling for someone so fast, you’re nearly addicted to them as if they were a drug. The song is sexy, playful, and even a bit comical at times. This collaboration reflects more of G-Eazy’s pride for the Bay Area, since Marc E. Bassy is another artist native to San Francisco. In G-Eazy’s eyes, the people of the Bay Area equal family.

Watching G-Eazy’s career flourish overtime has been a treat for long-time fans. As mentioned before, the rapper has endless admiration for artists from the west coast. What could be more satisfying than a song where G-Eazy shares “E-40, Mac Dre is who I grew up on” that features the Bay Area legend E-40 himself?

“Let’s Get Lost” is a song that hits home quite literally. G-Eazy found great success with this track on his debut album, These Things Happen, with the help of singer-songwriter Devon Baldwin. Baldwin is another fellow artist repping San Francisco pride. The two artists had been in a long-term relationship in the midst of the release, making this song even more breathtaking to listen to. Baldwin and G-Eazy have many more collaborations present on some of his older EP’s, and she even makes a brief appearance on When It’s Dark Out. This dynamic duo reflects the “glory days” of being young, talented and in love.

“Get Away” (Remix) is perhaps the greatest G-Eazy/Kehlani collaboration you probably haven’t heard. Released on SoundCloud in 2014, both artists were still on their come-up. The song was originally released by Kehlani, but soon after, G-Eazy got in contact with the 19-year-old singer to produce a remixed version. G-Eazy saw so much potential in Kehlani and decided to take her with him for the From The Bay To The Universe Tour, where they performed this track together live. Unfortunately, the song can only be found on SoundCloud and YouTube and is not available for streaming (hence why you probably haven’t heard of it!)

It’s no shocker that “No Limit” sits at No. 1 on this list. The single peaked at No. 4 on Billboard’s Hot 100 and remained on the chart for 29 weeks! This collaboration exploded everywhere and became one of the greatest, most popular party anthems of 2017/18… and to be honest, we’re all probably going to keep bumping it into this summer party season, too!