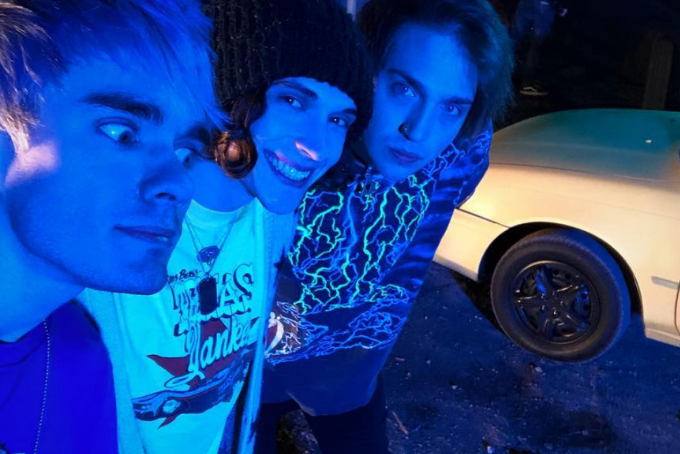 As they once self-deprecatingly mocked in their music video for “Stupid For You,” Waterparks is a bit of a boy band.

There’s nothing wrong with that—and in fact, it’s worked out very well for the Texas-based trio.

Their sugary-sweet take on pop punk is reminiscent of 2008, when bands like Forever the Sickest Kids and Cobra Starship still dominated Warped Tour (and MTV). Catchy tunes paired with boyish good looks and an active social media presence has scored Waterparks (or Parx, as their fans call them) a sizable following that’s easily made them one of the bigger names in this newest wave of pop-punk.

And their trajectory is only headed upward. They’re the newest addition to the Hopeless Records roster (home to bands like Tonight Alive and Neck Deep, and former home to what is arguably the Waterparks prototype, All Time Low), and they’re showing no signs of slowing down.

Their newest single, “Turbulent,” however, is a bit different from what we’re used to hearing from this band.

More synth-heavy, and, uh, well, edgier, both sonically and lyrically from the band’s typical fare, it’s pretty clear lead singer Awsten Knight was going through something when he penned this song.

No doubt, “Turbulent” is definitely an evolved sound. It’s more confident, more self-assured, and while not overly complicated in any way, still a very slick and high-polished effort. If MTV still played music videos, or had TRL, Waterparks would be the poster boys of festival-friendly pop-punk this summer, no questions asked.

Unfortunately, a more polished sound overall doesn’t always translate to better lyrics. Though given the genre they work within, it may be unfair (even unrealistic) to expect more than a typical “I hate my ex-girlfriend” lead single.

‪SUP YALL WE ON A MAGAZINE. IT LOOKS SO GOOD. COMES WITH POSTERS AND LIMITED SIGNED PRINTS. ORDER THIS BELOW AND STREAM TURBULENT. TODAY IS A GOOD DAY FOR WATERPARKS @ROCKSOUND ‬ ‪http://SHOP.ROCKSOUND.TV‬

Still, pop-punk is obnoxiously oversaturated with this type of content, and no matter how catchy or well done a song is, it’s not going to make up for the fact that we’ve heard this before. And it’s kind of boring.

Not that it’s necessarily Waterparks’ fault—they’re just following tradition. We just wish that, maybe, they’d try something different. They’re certainly talented enough to do so.

With all that being said, there is a level of self-awareness here that keeps the song from being cringe-worthy. Admittedly, the line “You had your own Awsten Knight // (Hi!)” is genius, and aside from the chorus, there’s a real sense of self-reflection with lines like “My anxiety was turbulent // and permanent,” which indicates that the raw feelings in this song are just that—raw—and Knight might be at a point where he can acknowledge his own fault in this relationship’s demise, despite the hurt he was very clearly working through.

Though this isn’t the first, (or second, or third…) breakup song that Waterparks has released, and it likely won’t be the last, “Turbulent” is hopefully a watershed moment for them that, many years from now, critics can point to as the moment that Waterparks went from another flash-in-the-pan, cliche, pop-punk outfit, to serious contenders in the alternative music scene.

Overall, it’s hard to judge what this new album is going to be like from just this single, but given everything, we’re feeling like Waterparks’ third full-length effort will be their best to date.

And as long as they continue to grow, and don’t get complacent, there’s a very strong chance they’ll become legends, the kind of legends that get name-checked in songs other than their own.