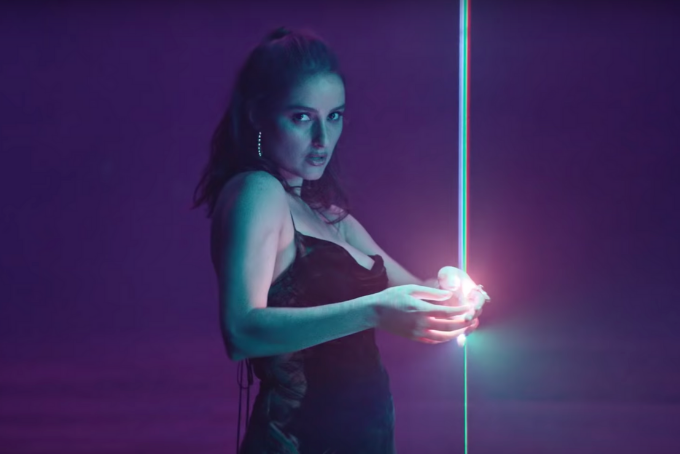 Banks made a big comeback with her single “Gimme,” and now, she has blessed us with an electric new music video. Banks is known to be very artistic and cerebral with her music, and her music videos are no exception. The music video for “Gimme” is a perfect blend of musicality and artistic expression.

The visual begins with a collage of light beams in a darkened space, pounding to the opening beat. The slow intro to the song and a slow pull of focus at the beginning of the video puts the viewer on edge, leaving them wondering what will happen next. The camera then pans in and we see Banks, who looks amazing in a green velvet slip dress, dancing very sensually among dirt and foliage.

Banks gives an electric dance performance intercut with close-ups of her wielding a light beam. These have to be our favorite shots. The “Beggin For Thread” singer looks like the goddess of light with the beam emanating from her palms. This music video is just as visually pleasing as the song is immersive. Overall, Banks has another beautifully poetic and visually stunning music video. Her forthcoming album III is slated to come out this July, so we’re excited to hear everything she has in store for us.

Banks’ visuals are an extension of her music. For her “Fuck With Myself” music video, she tortures a bust of her own head symbolizing the different ways people beat themselves up with self-doubt and negativity. So, even though this music video may seem very surface level at first glance take a look deeper at the lyrics—there is a more meaningful explanation to uncover.

Let us know what you think about the “Gimmie” music video in the comments or tweet us @soundigest!

One thought on “Banks’ “Gimme” Music Video Is Electric”