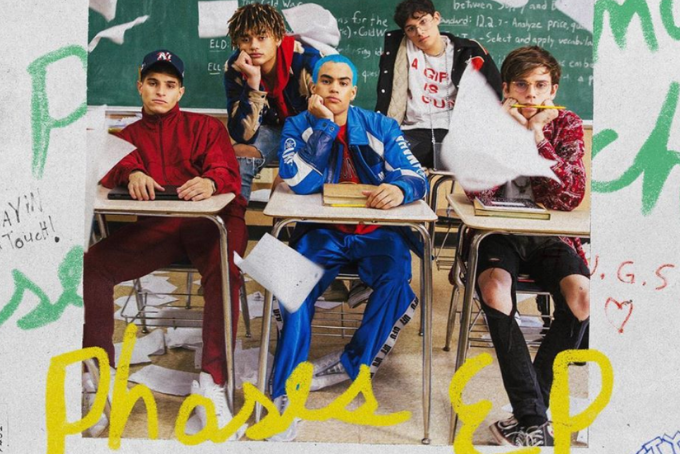 Last week, PRETTYMUCH dropped their second EP, Phases, and to say we were surprised would be an understatement. Known for their upbeat, fun pop songs, the “Teacher” crooners took a bit of a turn off the beaten boy band path and went for something more mature. In fact, the five young singers co-produced and co-wrote the entire 6-track EP.

The EP opens with its title track, “Phases,” which the band released on April 26 alongside its visual. The song immediately hinted at a more mature sound, not only in its production but in its lyricism as well. The American-Canadian boy band keeps the song’s message simple: it may not be the right time for this relationship, but it will be, and they’ll wait for that. If this isn’t the sweetest song concept you’ve ever heard, we don’t know what is.

The best part of the song? Zion‘s rap verse in the bridge. As catchy and beautiful as the rest of the song is, this verse definitely stands out.

Next, the band transitions into “Gone 2 Long,” the second single off of the EP. “Gone 2 Long” is equally as beautiful as the boys yearn for their significant other to come back to them (the sooner, the better). The song begins slow and smooth but gradually builds until it hits its peak toward the end, when the beat drops and Brandon dives into some incredibly controlled runs. (Seriously, we were, and still are, really impressed.)

“Eyes Off You” is up next, and we have it say, it’s a personal favorite. This love song begins simply with an acoustic guitar, but quickly, listeners will find that it’s anything but simple. There’s an intricacy to their words as they interweave them with the song’s soft production.

PRETTYMUCH takes charming to a whole new level, singing, “Don’t ask why, // I can paint a picture of you in my mind, love // All my life // I never thought someone would make me feel so high, // But here you are.”

After three straight love songs, you may be asking where all of the breakup songs are. Well, “Temporary Heart” is here to deliver. Based off all the love songs on this EP, it probably won’t surprise you that the boys are not doing the heartbreaking; instead, in “Temporary Heart,” they’re left heartbroken.

Track No. 5, “4U,” may be our least favorite from this collection of the boy band’s music, but don’t let that phase you because, like the rest of the EP, it’s still really good. The track flows nicely with its dreamy production and smooth vocals all around. It may take a few listens (hence our lower ranking), but you’ll be bopping to it in no time. And honestly, sometimes the best songs take a few listens to really catch their flow.

Last, but certainly not least, is “One Shot,” a heartfelt ballad that we can’t really get enough of. The boys go super soft in this track, making you feel like they’re singing directly to you as they ask for “one shot” at your love. There’s no better way to end this super sweet EP than with this ultra-sensitive pop ballad.

Needless to say, we’re very into this new direction that PRETTYMUCH is headed, and if this EP is any indicator of what we can expect from them on their debut album (hopefully coming soon), then we can honestly say that we’re hooked.

Listen to PRETTYMUCH’S Phases here, and let us know what you think in the comments below or by tweeting us @soundigest.