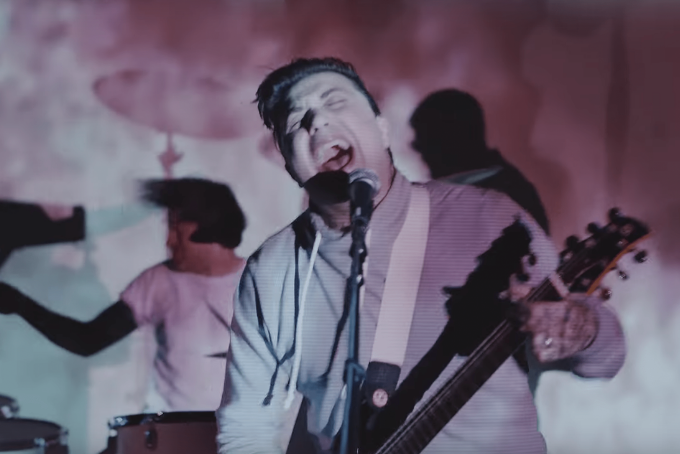 Frank Iero can be accused of many things, but being “inauthentic” is not one of them.

You’d expect that Barriers, Iero’s third solo release, and tenth full-length release overall, wouldn’t pack quite the same punch as some of his earlier work.

After all, he’s produced a lot of music, written a lot of content, and had feelings about a lot of things. You would expect that at some point he wouldn’t be able to draw that kind of emotion out of himself anymore.

But you would be wrong.

The most satisfying thing about Barriers, (aside from the fact that it is, overall, an excellent release) is that it carries the same weight and energy as Heartbreak in Stereo, from Iero’s first band, Pencey Prep.

It’s wonderfully, purely, earnest. It’s angry. It’s heart-wrenching. It’s a gut punch. It makes you want to scream, it makes you want to cry, and most importantly, it elicits the kind of raw, untamable emotion that most of us thought we killed once we left high school.

It makes you feel vulnerable, and that means something.

There isn’t a “down” moment in Barriers, and never a moment for the listener to breathe—ever.

In a way, it’s the musical equivalent to a panic attack, which is probably what Iero was going for.

From the raw mania of “Young and Doomed” and “Moto Pop,” to the calmer, but still emotionally charged tracks like “The Host” and “No Love,” Iero doesn’t give the listener a moment to process. You can’t think about the music he’s written, you just have to feel it.

With that being said, if you’re coming into this release (or any of Iero’s post-My Chemical Romance releases) expecting to come home to something familiar, you will be in for a rude awakening.

Iero eschews any and all of the polish and prestige given to him by his previous band to deliver a truly honest and gripping work of art.

No, there isn’t a concept here, nor did he bother to build a world or a storyline. There isn’t a comic book tie in. There are no “characters” in this album.

Frank Iero doesn’t need any of that.

He just needs four chords, a steady beat, and his truth.

But for as long as we’ve waxed poetic about how wonderfully raw this whole experience is, Iero has clearly grown as a musician and is a very talented songwriter to boot. Every track is an elevation from both Stomachaches and Parachutes.

Iero has been quoted as saying that Barriers is full of “things that I’d never attempted before but had always wanted to try,” and he was certainly fearless in writing these songs.

There are tangents of Post-Punk, Midwest Emo, Hardcore Punk, and even, to an extent, Blues. As each track effortlessly bleeds into the next, you’re left wondering what’s going to happen next, which sonic corner you’re going to turn, and which feeling Iero is going to force from you.

And for as much as Iero’s vocals can best be described as “wailing” rather than “singing,” he still delivers an excellent vocal performance, complete with harmonies and melodies that will get stuck in your head. Despite not being theatrical like his former singer Gerard Way, he’s still exceptionally memorable, and powerful.

Ultimately, Barriers is not a pretty album or always an easy listen. But it was never meant to be either of those things. It was always meant to be an artistic expression of someone who was unafraid to bare his soul, and it does that flawlessly.

It’s fitting that this album ends on a near six-minute ballad with lyrics like “Tonight we burn down Hollywood // Tonight’s our shared last breath // They’ll write about us in history books // Tonight we’re gold,” because above all else, this album is a triumph. Not only for Frank Iero but for the listener as well.

We’ve been through this journey together, and even though we’ve suffered, we have still won.

Barriers will likely never see commercial success in the way that it should, but it will definitely end up being the kind of cult album that influences generations of musicians to come. Mark our words now, Barriers is important.