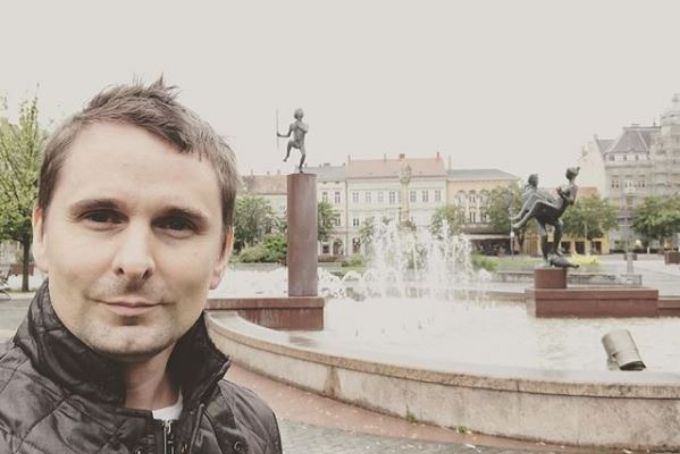 June 9 is just around the corner and that means Musers have something to celebrate! Muse frontman Matt Bellamy will be turning 41 on Sunday. When he’s not being a rockstar on stage, Bellamy leads a pretty interesting and unique personal life. Here are some fun facts you probably never knew about Matt Bellamy:

1. He can say the alphabet backward

During an interview with Zane Lowe back in 2006, Lowe asked Bellamy if he could say the alphabet backward. Impressively, Bellamy got it on his first try, even after saying he hadn’t done it for a long time. It’s definitely a unique party trick!

If you listen to pretty much any Muse interview from the past few years, there is a good chance Bellamy will bring up his beloved sheep. When he’s not touring, Bellamy cares for sheep on his farm back in England. In an interview with BBC’s Radio 1, Bellamy said that at the time he had up to 160 sheep!

3. Bellamy’s father was a member of The Tornados

Bellamy isn’t the only famous one in his family; his father George Bellamy was the rhythm guitarist for The Tornados in the 1960s. The band had several songs make it on the charts, including the hit “Telstar,” which reached the No. 1 spot in both the U.S. and U.K. It was the first U.S. No. 1 single by a British group.

4. He wrote a song for Adam Lambert‘s debut album

Bellamy contributed to American Idol winner, Adam Lambert’s, debut album For Your Entertainment. Bellamy co-wrote the lyrics to the track “Soaked” off of the 2009 release.

5. He holds a Guinness World Record

It looks like Bellamy’s bandmates have to make sure to keep an eye out for flying guitars. Bellamy is known for smashing and throwing guitars onstage at concerts; so much so, that he broke a world record for it! Bellamy is the current holder of the World Record for Most Guitars Smashed on a Tour. During the band’s 2004 tour, in support of the album Absolution, Bellamy destroyed a total of 140 guitars!

6. The first song he learned to play on the piano was the theme to Dallas

Even though he was born and raised in England, Bellamy grew up watching a few famous American shows with his older brother. During an interview with NME in 2001, Bellamy revealed that the first song he learned to play was the theme song for the iconic TV drama Dallas. He explained: “When I was about three, my brother used to hold me in front of the TV, and then put me at the piano and make me work it out with one finger. Then he’d show his friends and say, ‘Look, he’s a machine!’ I remember being picked up and carried from the TV to the piano.”

7. He can pronounce a very unusual word

Saying the alphabet backward isn’t the only unique language skill Bellamy has. During an interview on French television, Bellamy said the word “Floccinaucinihilipilification,” which honestly sounds completely made up. Surprisingly, it is a real word and is actually the longest non-technical word in the English language. While Bellamy confessed he had no idea what the word meant, according to dictionary.reference.com, it is “an act or instance of judging something to be worthless or trivial.”

8. He owns a jetpack

Okay, while it might not be what we would typically view as a jetpack, it’s one of the closest things we have. While touring in support of Muse’s first album Showbiz, Bellamy impulsively purchased a paramotor, which is essentially a motorized paraglider. While he admitted that he had not used it that much, he emphasized that he would practice flying more.

What facts surprised you the most? Let us know, and join in on wishing Matt Bellamy happy birthday!