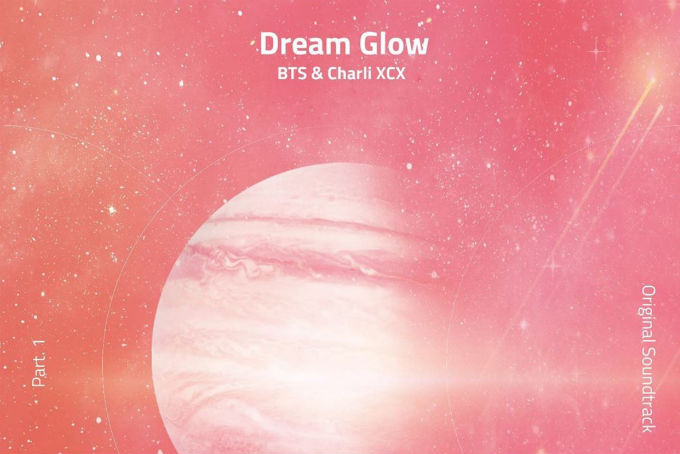 BTS have big plans for the summer, and we’ve got the first taste of what’s to come! The K-Pop superstars recently announced the release of an upcoming mobile game called BTS World. Players will get to become managers for the group. The game is being developed by Netmarble and will be released on June 26, 2019.

The group will also be releasing a bunch of new songs to be part of the game’s soundtrack. The first song to be released, “Dream Glow,” is a collaboration between members Jin, Jimin, and Jungkook, and British pop singer Charli XCX.

“Dream Glow” is a sweet and chill synth-pop track. Charli opens the track with her unique voice, contrasting nicely with the higher range of the BTS members. Jungkook joins in with lines delivered in excellent English, a nice surprise showing his advancement in the language. Of the three male vocalists, Jimin takes the lead, delivering lines with swagger and a slight edge, showcasing a side of him different from his usually sweet and airy delivery. Eldest member Jin joins in with his breathy vocals, balancing out the boldness of Charlie, Jimin and Jungkook.

Acccording to ARMY members on social media, the track was originally intended to be a duet between Jimin and Charli XCX before Jin and Jungkook joined. It makes sense given that Jimin leads the majority of the track, especially the chorus, but the addition of Jin and Jungkook is a nice touch.

The biggest takeaway from the song for us is balance. Each person has their role and shines beautifully in them. With that said, we would have liked to hear more of Jin’s vocals. He has a mature voice while still managing to sound youthful. For an ethereal track like this, it would sound amazing if he was featured more.

“Dream Glow” is a refreshingly light EDM and pop song. It’s a great summer track for being out in the sun, or even watching the stars at night.