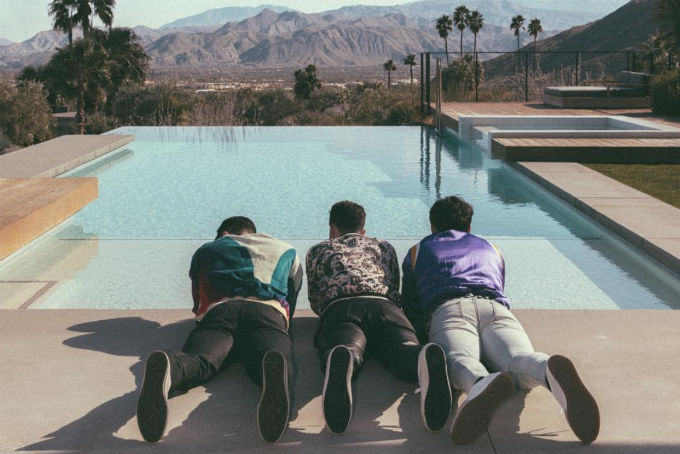 An indie-folk song plays at the beginning of the Jonas Brothers‘ new documentary, Chasing Happiness, over a montage of the band as children. The documentary shows the brothers from the height of their fame until now, as they re-emerge into the music industry possibly bigger and better than ever. The inclusion of another band’s song seems like an odd choice in a film about a band getting back together—that is, until Amazon revealed that the song is actually “Rollercoaster” from their new album, Happiness Begins. Despite sounding like an indie-pop song similar to Avicii‘s “Hey Brother” or something off a Lumineers record, the song is actually a reflection of Kevin, Joe and Nick’s new sound.

Since the album’s first single “Sucker” was released in early March, fans have known this album would bring a new, more mature sound to the group they’ve loved for nearly fifteen years. “Sucker” was cool, it was upbeat and funky, but it also felt like a natural progression from their earlier catalogue. It sounded like what the Jonas Brothers would have evolved into, had they not fallen apart in 2013.

Most significantly, “Sucker” is imbued with a happiness that their last tracks—”First Time” and “Pom Poms”—lacked. In 2019, it’s clear that the brothers are genuinely happy to be back together, and glad to have worked through the animosity lingering after their breakup. This new sound reflects the new and more emotionally and stylistically mature Jonas Brothers, but the clear growth from earlier hits like “S.O.S.” or “Burnin’ Up” allows audiences to step right back in. They’re older now, too, but they can still connect through the nostalgia of reliving their teen years or watching their former favorite band come back together.

However, if “Sucker” reflects clear growth from the earlier Jonas Brothers, the album’s third song, “Only Human,” turns the track. For the next several songs, the album feels much more reminiscent of Nick Jonas‘ earlier work — that slow and sultry, pseudo R&B pop that so many former teen heartthrobs go for. In fact, Joe’s high notes on “I Believe” sound like they would fit well with ZAYN‘s post-One Direction music; the beat of “Love Her” sounds eerily similar to Justin Bieber‘s “Love Yourself,” and the album as a whole seems to be what Liam Payne was trying to achieve with much of his solo endeavors. This shift in tone is slightly jarring to the listener, but not altogether unwelcome.

One of the stronger points on the album is the lyrical work. From “Kiss the tears right off your face // Won’t get scared, that’s the old, old, old me” to “You got all my love to spend // Let’s find a place where happiness begins,” it’s clear Happiness Begins is a far, far cry from early lyrics of “I was fine ’till 7:05 // When you walked out the door and right out of my life.” The ultimate key here is the sheer level of experience these boys now have—Nick Jonas was just 14 years old when they released “7:05,” and openly admitted in Chasing Happiness that in their first few albums, he was singing about a love he had never experienced. Now, however, all three brothers are in mature, committed relationships, and the truth in the words is felt in the growth and depth of the love songs they sing.

Chasing Happiness ends with the album closer “Comeback” playing over shots of the brothers reconnecting after six years apart. Again, it sparks a moment of confusion, as the song sounds so separated from their earlier catalogue. But, like “Rollercoaster,” the new sound of soft, slightly indie vibes fit naturally on this album of shifting genres and new perspectives. Despite not including even one signature, high-pitched “yeah” from Nick, Happiness Begins is, on the whole, a strong album that showcases the growth of a band of brothers. And so far, the fan reaction has proven that the comeback was well worth the wait for when they were ready and genuinely happy to be making music once again. Bravo, boys!