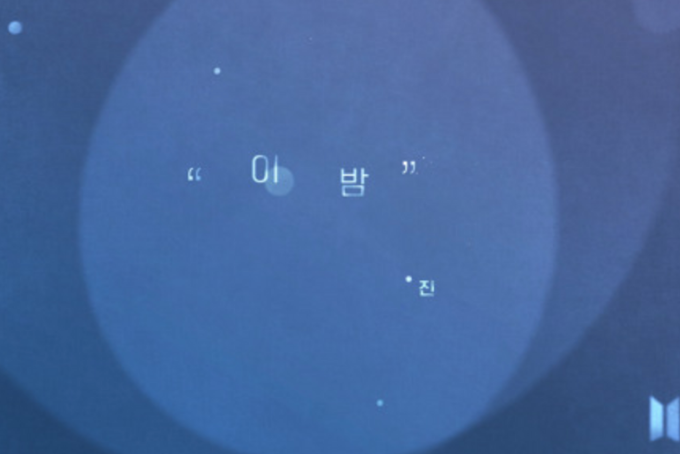 BTS is in the middle of a multi-week celebration leading up to their 6th anniversary, known as Festa. As part of the celebration, the group has been releasing new photos, previously unseen videos, and of course, new music. Last week, Jimin, Jin, and Jungkook released a collaboration with Charlie XCX. Now, eldest member Jin has released a solo single titled “Tonight” on the group’s Soundcloud channel.

“Tonight” is Jin’s third solo song following “Awake” off of Wings and “Epiphany” from last year’s Love Yourself: Answer. Both “Epiphany” and “Tonight” were written by Jin himself. In an accompanying blog post, Jin revealed that he was inspired by his pets to write the song. Jin has had a dog and two sugar gliders who have sadly passed away, but currently has a pet sugar glider named Gukmul. Jin’s pets have made appearances often on the group’s Twitter. Jin’s love for his pets has helped him write a beautiful and moving ballad.

“Tonight” starts with Jin’s soft voice accompanied by an acoustic guitar, before backing vocals join him. Jin reaches into his falsetto often in the song, a testament to his development as a singer. When Jin first joined BTS, he had no prior singing or dancing training, making his journey with the group all the more inspiring. The chorus kicks in with Jin soaring further into his higher register while the track transitions to synth-pop.

Jin’s vocals flow smoothly with the arrangement, airy but full of confidence. The lyrics are touching, as he sings of longing for a loved one who is no longer there with him. It’s heartbreaking but somehow comforting as he reflects on happy memories with that person. In the final verse, Jin’s voice is filtered to sound as though he is singing through a phone speaker, emphasizing the theme of distance. It’s a subtle touch that contributes greatly to the weight of the words being spoken.

“Tonight” is a great example of Jin’s strength as a ballad writer and ever-growing skills as a vocalist. Through his solo work, we see a more mature side to him, one that finds the beauty in simplicity.

Listen to “Tonight” below!