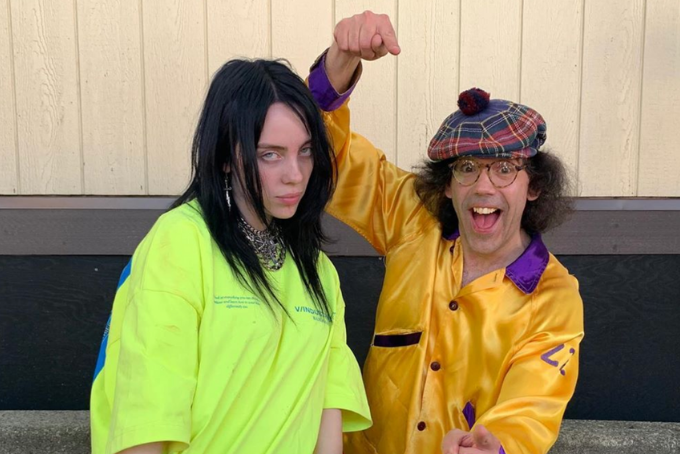 Best known for his quirky video interviews with massive pop stars, Nardwuar (also known as Nardwuar the Human Serviette) has been inducted into the BC Entertainment Hall Of Fame. Having interviewed countless musicians and celebrities, this award was certainly well deserved.

I am honoured ! Amazing ! Thanks so much to the B.C. Entertainment Hall of Fame for inducting me ! Soon my star will be placed in the pavement on ‘The Walk of Fame’ on Granville St. in Vancouver, BC Canada ! 30 different people nominated me for this and I am so grateful for them ( and you ! ) for believing in me ! I would like to dedicate this Star to my Mom who instilled in me a deep love of history. Also, if I, Nardwuar the Human Serviette, can do it … so can you ! Doot doo ! @bcentertainmenthof @citrradio @muchmusic @discordermag #vancouver #bc #canada @intersectionsmedia @mintrecords #bcentertainmenthalloffame #nardwuar #nardwuarhistory #dootdoo

In his 32 years of interviewing, Nardwuar continues talking with some of the biggest names in music and entertainment. He’s interviewed stars such as Cardi B, Jay-Z, comedian Seth Rogan and talkshow host Stephen Colbert.

Nardwuar’s first offered interview was with the iconic Snoop Dogg in 2000. Despite their different personalities, Nardwuar stuck to his quirkiness. He made tremendous efforts before-hand to find points where they could break the ice. Having impressed Snoop with his odd charm, the two have had their tenth interview earlier this year.

Nardwuar has always reached to interview the biggest stars of the decade. He hops onto these opportunities whenever they roll into Vancouver B.C., Canada. Even in the early days of his career, he’s managed to score interviews with punk legends Kurt Cobain and Courtney Love. Other legendary acts he’s interviewed include The Misfits and The Strokes.

His interviews are usually filled with abnormal questions, statements that trigger some very specific (and personal) memories and gift giving. Regardless of who he’s interviewing, he always finds shocking information. During his interview with Tyler, The Creator, he asked if his mother was half Canadian. Tyler’s response was hilarious, asking in complete shock, “You with the fans?” Nardwuar continues to dig and find information even these celebrities’ biggest fans can’t even discover. Despite being asked on and on again of how he discovers these buried facts and items, he never reveals his secrets.

Make sure to check out his most recent interview, with the dark pop superstar Billie Eilish. This is the second time he’s interviewed her and continues to shock her with memorabilia and facts from her childhood she can’t even remember.

Keep on rockin’ in the free world, Nardwuar!