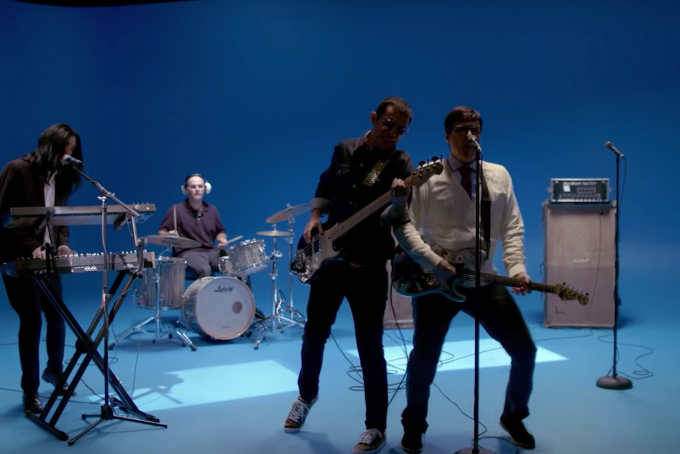 If you were to ask a group of 100 people what they associate Weezer with, there’d be a plethora of answers. Some folks might say their meme-worthy cover of Toto‘s “Africa.” Others might say their landmark emo album Pinkerton. Still, others might reference the Weezer song, “Beverly Hills.”

But realistically, most people are going to talk about their music videos.

Weezer didn’t invent the quirky music video, but they certainly helped popularize them. Everyone, and yes, we do mean everyone, has a favorite Weezer music video, and it’s likely that they don’t actually know the name of the song it comes from.

Weezer’s music videos are referenced like Friends episodes: “You know, the one with the…”

5.The one where they’re in Happy Days AKA “Buddy Holly”

Only their second single, and arguably the one that put them on the map forever more, “Buddy Holly” is a fine song on its own, and is a fun little piece of self deprecation. Heck, “Weezer” is probably the first thing most people think of when you say “Buddy Holly,” before they think of the actual singer. The music video, which features the band playing in an episode of “Happy Days” allegedly used no CGI, just some very clever camera work.

4.The one with the Muppets AKA “Keep Fishin'”

This one works specifically because there’s only one group of people in the world that you’d legitimately believe can be kidnapped by some Muppets, and that group is definitely Weezer. (Well, just their drummer, anyway.) It’s not only funny for a music video, but it’s also a thoroughly entertaining piece of Muppets cannon, which is saying something.

3.The one where they’re in all the viral videos AKA “Pork and Beans”

Now, the video just seems dated, but when it came out (now over a decade ago), it was pretty incredible to see a band that in touch with internet culture. Featuring internet relics like Tay Zonday, Charlie the Unicorn, and The Dramatic Chipmunk, kids these days would be hard pressed to name any of the “celebrities” featured on here, let alone understand why this was such a big deal when these days, YouTube releases their gigantic “YouTube Rewind” collaboration annually.

But us old folks? We remember how cool this was.

2.The one where Weird Al Yankovic is Rivers Cuomo AKA “Africa”

OK, so “Africa” isn’t a Weezer song, technically, but the fact that they’ve had a career so long that they can recreate old music videos, and it works, is still pretty cool.

Of course, the keen observer might notice that there’s something just… a little different about Rivers Cuomo, and we’re not just talking about his age.

We just can’t put our finger on it…

1.The one where they’re at the Playboy Mansion AKA “Beverly Hills”

Admittedly, a bunch of white dudes in polo shirts and sweaters singing about how they don’t have any privilege hasn’t exactly aged well, but you know, we get the sentiment. We were born poor, too.