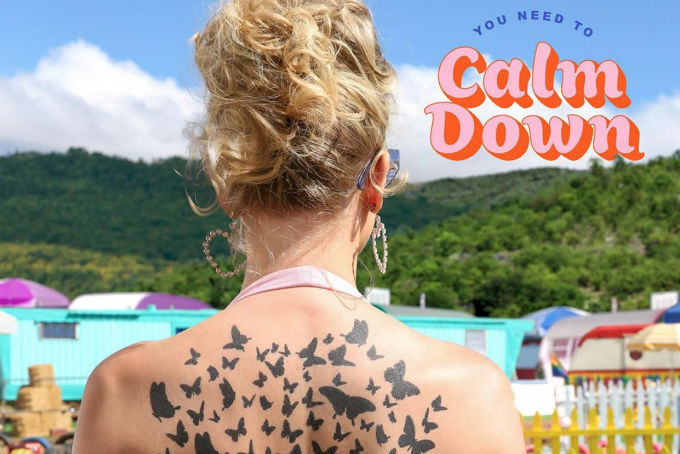 In “You Need to Calm Down,” a new single from her upcoming seventh studio album, Lover, Taylor Swift is shaking off a certain type of hater: homophobes. The song speaks directly to those who are always concerned with the lives of other people, telling them to take a deep breath and let go of their hatred for those who are different than them.

Swift has always been an LGBTQ+ ally, but Swifties around the world would agree that she’s really taken this pride month by storm. On June 1, she posted a letter she wrote to her senator, which was written in favor of passing the Equality Act. The letter was accompanied by a significant donation to the LGBTQ+ organization, GLAAD. Earlier this year, Swift made a record breaking donation to the Tennessee Equality Project. Now, it seems that the superstar’s generous allyship has bled into her clever pop lyrics.

Although this is not the first time the 29-year-old has written lyrics in support of the LGBT community, “You Need to Calm Down” tackles homophobia head on. The song has a bold pop beat that is steady throughout the whole track, making it perfect for summer. But Swift’s vocals and lyrical content stand out over the simple, yet effective production.

In the first verse, Taylor sings about people who say one thing to your face, but go and say the complete opposite online. She approaches these haters with humorous lines that poke fun at how dramatic it is to stress over someone else’s life. She then follows up with the triumphant line, “Snakes and stones never broke my bones,” referring to the Reputation era’s attitude of rising above those who try to tear you down, and the snake motif.

The chorus is extremely fun, and the layered vocal arrangement of Taylor’s “oh’s” is pleasing to the ear. In typical Taylor Swift fashion, there’s a lot to analyze while listening to the lyrics. It’s important to note that during the first chorus, Swift sings, “can you just not step on my gown?” In the second chorus, it changes to “his gown,” and in the third chorus there’s another switch with “our gowns.” Changing the pronouns with each chorus makes the song even more inclusive and specific to each topic Taylor is tackling. This is an example of her attention to detail, which is one of the many elements that makes Taylor’s songwriting exceptional and unique.

In the second verse, Taylor speaks directly to homophobes who show up to pride parades with hateful signs. “That must have taken all night,” she sings. She suggests that, instead of showing up places to spread hate, they should try to fight the urge to scream about all of the people they hate because “shade never made anybody less gay!” This line, in particular, resonated deeply with Taylor’s fanbase, and LGBT Swifties felt celebrated, safe and supported by one of the world’s biggest popstars.

The song ends with Taylor denouncing one last group — those who pit successful women against each other, as if it’s impossible for women to succeed simultaneously. But don’t worry, Swift and the other women who are rising to the top have figured out that they can all wear crowns, and that one someone’s success doesn’t undercut someone else’s.

“You Need to Calm Down” is a sarcastic, uplifting and empowering anthem for anyone who has felt judged by people who are bothered by things that don’t affect them at all. It’s a proclamation of support, and a warm hug for the LGBTQ+ community from a pop sensation who has notoriously stayed out of politics. On the surface, “You Need to Calm Down” is the ultimate summer smash. But to Taylor Swift’s fans — and especially those in the LGBTQ+ community — it’s so much more.