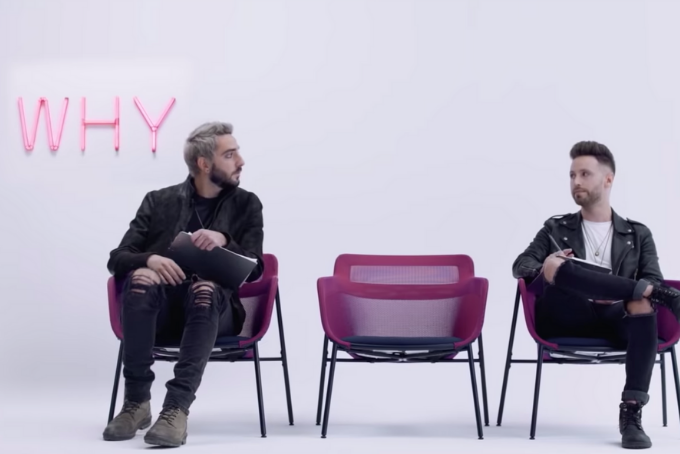 Between Blink-182, Simple Creatures, and now, Jack Barakat’s new side project, WhoHurtYou (cleverly abbreviated as WHY), it really feels like punk, is indeed, going pop.

The timing is right. With all of All Time Low (and their subsequent generation of pop-punk) entering their thirties, there’s a new level of maturity hitting the scene. You don’t want to be wearing shutter shades the rest of your life, and truthfully, there’s a whole new generation of kids coming in to take over the angst-and-party mantle.

(And not to be ageist or anything, but endless angst and partying at 30-something really isn’t a good look, so kudos to these guys for trying something new.)

WhoHurtYou’s newest single “Wish We Never Met,” is a fun, if not forgettable track, which seems to be the theme of a lot of these “more pop-than-punk” side projects. We’re not going to be too critical of the trend, though.

Again, trying something new is hard, and having to do it publicly is harder. If we had to face public scrutiny every time we tried something we thought might be fun, we’d never have fun again.

But as compared to other bands on the Fueled By Ramen roster (punk newcomers SWMRS, scene superstars Twenty One Pilots, and one of the few punk bands to actually transition into pop well, Paramore) WhoHurtYou just falls a bit flat, which is a shame because it’s easy to tell what this song, and this band, actually wants to be.

Watch our video for #WishWeNeverMet now at @billboard. Use the link in our profile.

This is the most open and honest we’ve seen Barakat, but it gets lost in the delivery. Vocalist Kevin Fisher is a fine singer, and there’s nothing inherently wrong with 80s-influenced synth-pop (other than it’s a little oversaturated at this point, but that’s for another article…), but the actual message of this song—Barakat’s mental health reflection—is absolutely muddled when combined with this piece of music.

In a way, it’s two steps forward, one step back—even when Barakat wants to be open and honest about his feelings, he hides it behind a pop song. And while the combination of “sad lyrics against happy song” isn’t new, and has definitely been done before, there’s a certain level of songwriting mastery required to make it work. Songs like The 1975’s “UGH!” or “The Sound” work because the lyrics are particularly clever. When not fully realized, the whole thing feels disjointed, or worse, insincere.

At least with this single, as compared to some other side-projects, you can tell that WhoHurtYou is trying really hard to be authentic and sincere. There’s a level of earnestness in this song that is rare, especially coming from someone like Barakat who’s been around the block more than a few times.

One just wonders if the message of this song would be better delivered in the vehicle of a solo project—just Barakat and a guitar. Maybe he’s not ready to be that exposed yet, but it might’ve been a better take at what he was trying to say.

While we’re glad that WhoHurtYou is out here, we were just hoping for a little bit more. But it’s okay if they can’t give that to us right now. We’ll eagerly wait to see where they go next.