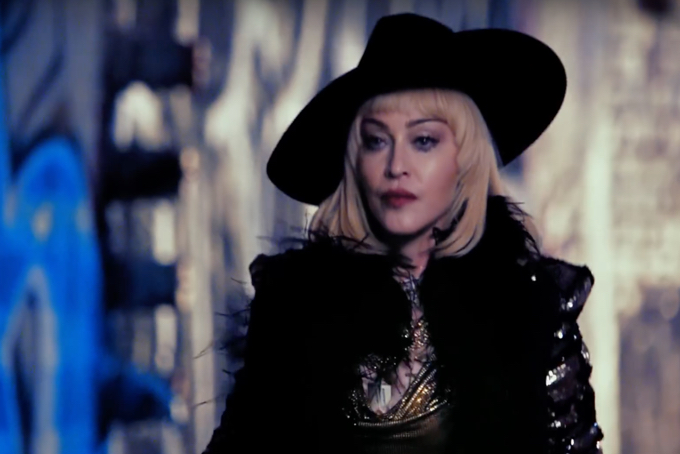 Madonna has never been one to shy away from expressing herself within her art, regardless of whatever controversy may follow. Whether it’s in the form of a music video, song lyrics, or live performances, the Queen of Pop always says what she needs to say. Therefore, it’s no surprise how brutally honest Madonna gets in the emotional and graphic “God Control” music video.

The Madame X track “God Control” has a poignant message, and it’s one that’ll rub some people the wrong way. Gun violence has been a hot-button issue for years now, and the United States government can’t seem to come to an agreement on what to do about it. Like millions of Americans, Madonna Ciccone has had enough and she’s using her art to prove her case.

This is your wake up call. Gun violence disproportionately affects children, teenagers and the marginalized in our communities. Honor the victims and demand GUN CONTROL. NOW. Volunteer, stand up, donate, reach out.

The eight-minute music video mostly follows a reverse chronological order where you witness a graphic nightclub shooting almost immediately. Then, you’re given a look at the moments leading up to the horrific event. It shows how an average person with access to heavy weaponry can quickly destroy countless lives, especially in a place where people typically go to have fun and be carefree. There are scenes depicting gun control rallies sprinkled throughout to further drive the message home. The brief image of a child clinging to a massive weapon is particularly chilling, especially in context with the video.

The final 30 seconds of “God Control” provides statistics regarding the heavy topic, referencing the more than 36,000 people who are killed in acts of gun violence every year and the approximately 100,000 who are shot and injured. Madonna is “no longer accepting the things I cannot change” and “changing the things I cannot accept,” as per the Angela Davis quote at the 7:50 mark. Some may find the graphic depiction in bad taste, but gun violence is religiously glorified in film and television. An iconic pop star using her voice to ask the world to wake up and make sensible changes is a noble cause in our book.

You can watch the “God Control” music video below and determine whether Madonna pushed the boundaries too far or not, but be warned that there is graphic violence involved.