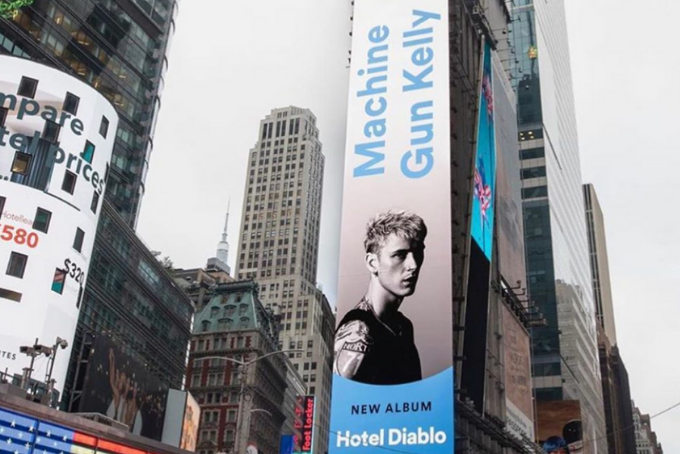 For the uninitiated, your introduction to Machine Gun Kelly (or MGK as he’s often referred) was probably by seeing him play Tommy Lee in the Netflix movie The Dirt.

But Machine Gun Kelly is, first and foremost, a musician, and his fourth release, Hotel Diablo, is a genuinely good (and maybe even surprising) release from him.

Now, to be honest, having someone who predominantly covers alternative and punk music writing about the latest Machine Gun Kelly album seems a little misplaced. But MGK, like many artists, is multifaceted and doesn’t just play in one genre.

A quick Google search reveals that rock has played a considerable role in the rapper’s art, and in Hotel Diablo, those influences really come out to play. Aside from the fact that Travis Barker (most famous for being the drummer of Blink-182) handled a good amount of production for this album, other artists, such as Naomi Wild and YUNGBLUD are featured, giving this album an overall more varied and nuanced feel.

Generally speaking, Hotel Diablo tries to stray from the expected, with the opening track, “Sex Drive,” being a lush and ethereal track that might be more at home on an album by The 1975 than Machine Gun Kelly. Tracks like “Burning Memories” and “Candy” also feature more lo-fi, lush sounds, showing off a certain maturity from MGK that is maybe unexpected, but certainly welcome.

pop up shop in Cleveland still up till tomorrow night. 645 Prospect ave across the street from the Church of Christ #HotelDiablo

There are other tracks, like “Glass House” and “I Think I’m OKAY,” that are a little slower and more ballad-like, and while they don’t stand out against some of the better-written or upbeat tracks, they’re still strong efforts and smart departures from the typical, overly masculine rap that MGK is known for.

But the most clear influence on this album is, actually, Linkin Park. Musically, tracks like “Hollywood Whore” and “Roulette” show major similarities with the feature of pianos, synths and clean guitars against more steady punk beats (in fact, listen to “Crawling” by Linkin Park and then compare them), but lyrically overall, the more introspective, confessional lyrics show a vulnerability that make him sound more like Mike Shinoda than Eminem.

Ultimately, the triumph in this album for MGK is the fact that he’s willing to branch out and try something different. The music industry these days is far less divided by genre than it used to be, and what ends up standing out above all else is good music.

It’s very likely that Hotel Diablo will end up being the Machine Gun Kelly album, and it feels like creating a magnum opus was really what he was going for. Only time will tell if this prediction is actually true, but much like Twenty One Pilots cementing their fame with Blurryface, or My Chemical Romance forever being immortalized with The Black Parade, Hotel Diablo feels like the big, ambitious effort that will be forever associated with Machine Gun Kelly.