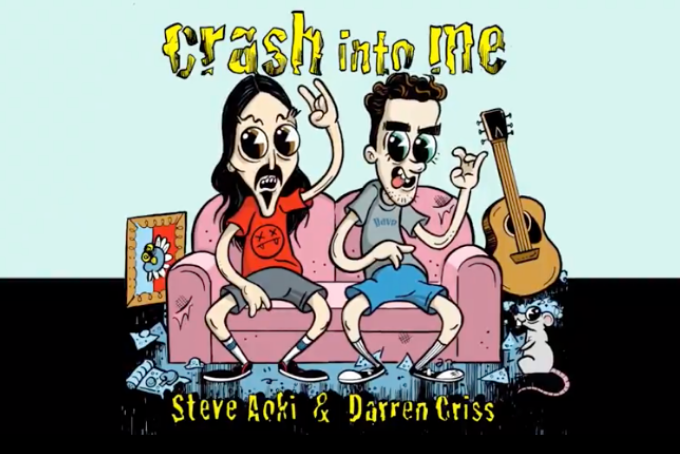 Let’s be honest, at least half the diehard Darren Criss fans (if they still exist? Do they still exist?) probably know “Crash Into Me” from Eduardo yelling, “Dave Matthews Band! Crash Into Me,” as he struggles to connect with Andy in Parks and Recreation. But, indeed, it’s actually one of their most famous songs, and a slow, sweet ballad at that. The last thing one might expect to get is an EDM remix.

And yet, here we are. Darren Criss and Steve Aoki’s new take on “Crash Into Me” opens as a folksy, almost acoustic pop song. It’s more upbeat than the original but still has several similar elements. In fact, for the first thirty seconds, any affiliation with Steve Aoki feels shockingly out of place.

But then, the pre-chorus begins and the beat builds. It’s clear now, this has Aoki’s mind behind it. As a creator, one of one of Aoki’s main strengths is his ability to work with a wide range of genres and artists. He’s collaborated with musicians as diverse as BTS, Louis Tomlinson, blink-182, Lady Antebellum, T-Pain, Gucci Mane, hell, even Bill Nye the Science Guy. At the same time, listening to one of his songs evokes a certain familiarity in the way the rhythms are crafted.

It was a lot of fun working in the #neonfuturecave with @darrencriss. We might have had more fun in the rest of @aokisplayhouse tho. Go check out #crashintome tell me what you think

With “Crash Into Me,” though, this doesn’t work. As the sweet ballad builds and gains its strength, the song becomes increasingly irritating, which is not to demean Aoki’s talent as an artist. However, why anyone felt this would be the right choice is a little beyond us.

For example, this “Crash Into Me” expands upon the “King of the Castle” sample. Rather than being a simple line at the end of the song, the reference is elongated to encompass the last third of the song. But the change feels cheap and turns a subtle reference into a grating musical motif, making the final third of the song incredibly frustrating.

Overall, no one needs to fuss over Criss and Aoki’s take on “Crash Into Me.” It’s not an interesting interpretation; it’s not bringing anything new to the table. The styles don’t mesh, but not in any way that challenges music’s canon. Despite its problems though, the larger problem is that the song is 23 years old at this point and really, was there any demand for an EDM take on Dave Matthews Band?