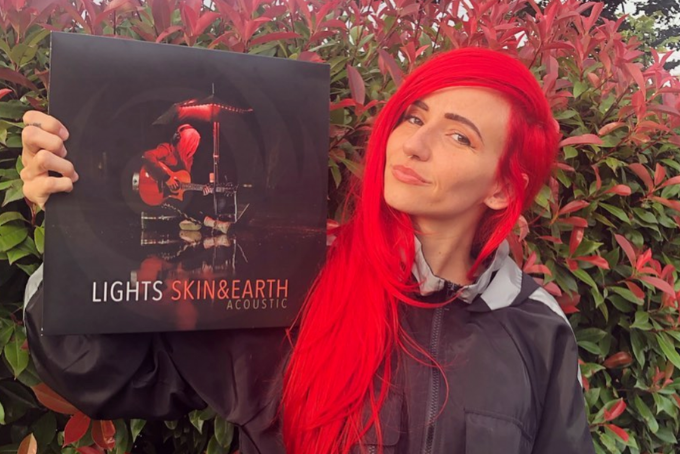 The album tells the story of the fictitious Enaia Jin, a woman searching for hope in a post-apocalyptic world, when she meets a friend that leads her to become “much more connected to the world around her than she ever thought and sets her on a journey that could change the course of everything,” Lights told CrypticRock.com in 2017.

She’s here ⚔️ first timer here producing and mixing a whole project but I’m hella proud and *might’ve* put a little too much of me into this one 🖤 get it wherever you get your music #skinandearthacoustic pic.twitter.com/NozGEv5avn

Two tracks stand-out are “Almost Had Me” and “We Were Here.” “Almost Had Me” is a deep cut that concludes both the acoustic Skin&Earth tracks, and the original LP. In the song, Lights preaches about how she almost didn’t make it and failed at her destiny. Of course, this is conveyed in the last issue of the comic, but the acoustic sounds of the track make you feel the words with so much more weight.

“We Were Here” is an upbeat empowering track that hypes you up. It brings an interesting light to the track and makes you hear what she preaches deeply compared to the original.

The LP features three new songs to complete the story of Skin&Earth. “Tabs” is an anthem that tells you to live in the moment because no one really is keeping tabs on you and the one you love, while “Lost Girls” is a song screaming female empowerment.

The final song on the album, “Down Forever,” talks about how you’ll won’t be at your lows forever and to not be too hard on yourself. There has yet to be no official confirmation on how these three tracks will tie into the comic world of Skin&Earth.

Reposting this because the link wasn’t working. Got major finger blisters from acoustic tour rehearsals but damn i can’t wait for this. Just wait til you see it with the strings and the full on vibes 😍 put this up to your ear! Only a few tix left 🖤https://t.co/L9xHOv3aqs pic.twitter.com/ywIBjLQ3fJ

Lights will be headed out on an acoustic North American tour for the Skin&Earth Acoustic LP starting on July 24 in Chicago. Tickets and other dates can be found online at iamlights.com

You can watch Lights’ music video for “Lost Girls” directed by her husband, Beau Bokan (of Blessthefall) HERE: