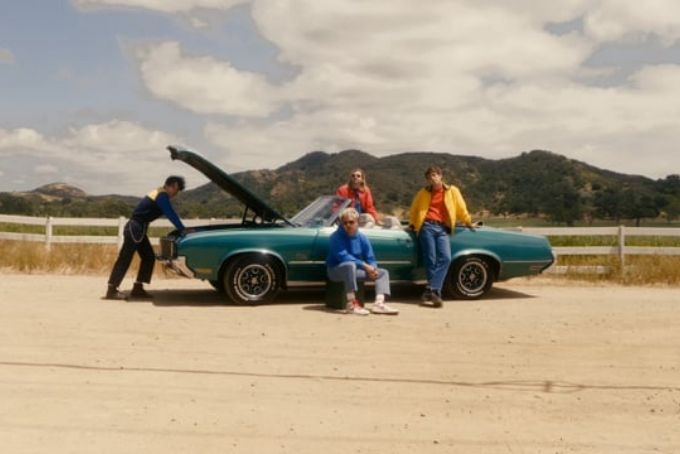 The up-and-coming indie-rock band HUNNY is determined to make it on your playlists and their first full-length album Yes. Yes. Yes. Yes. Yes. is proving to be worthy of your adoration. HUNNY’s eight-track album’s the perfect blend of indie-rock, ’80s synth beats and “’90s pop,” as the group’s website bio details. The guys — Jason Yarger on vocals; Jake Goldstein on guitar; Kevin Grimmett on keys/synth, bass and vocals; and Joey Anderson on drums — have worked hard on their debut, which gives us a burst of melodic nostalgia while tugging at our angsty heartstrings.

Yes. Yes. Yes. Yes. Yes. starts off with a synth-pop bang on “Lula, I’m Not Mad,” a previously released single fans have appreciated. Yarger pleads with Lula to care about him in the ways that he cares and is affected by her and her choices. But it’s clearly a one-sided feeling as he finishes his pleas with “on another planet with you.” Anderson’s cymbal-heavy beats and Grimmett’s synth contributions, along with a female’s backing shouts of “Hey!” give the song a dreamy quality. We, as the listeners, are in Yarger’s idealized world, right where he wants us. And even though the song’s narrative is less than perfect, the band manages to embark on a fun and hilariously problematic adventure in the music video.

“Change Ur Mind” is dominated by Grimmett’s synth and Goldstein’s electric guitar, leaving a sultry summer taste in its wake. The catchy tune, like the opener, is coupled with vulnerable lyrics, showcasing the heavy distance between Yarger and the woman involved in the narrative. He describes how she has disappointed him, only to conclude that he can be disappointing as well, ending on an ironic note — as he pleads for her to change her mind, he has also changed his mind on the situation.

In “Slow Death in Pacific Standard Time” Goldstein’s wailing guitar matches the painful content matter. The lyrics paint a picture of a friendship gone; the tune’s subject has made the frontman guilty, always discontent and insecure after hangouts, which has now worn Yarger down. Once again it’s covered in danceable wrapping paper with lots of skilled musicality from the quartet. Halfway through we hear a tempo change, followed by a guitar solo that leads into a classic drum build-up and satisfying key change, bringing us to the narrative’s resolution.

“Saturday Night,” another previously released track, features Bleached. Both bands talk back and forth in conversation; the two people within the narrative aren’t seeing eye-to-eye again. Yarger sings “I heard that you’re honest” in the first stanza, which circulates back near the end when Bleached state, “I’m not sure if I’m being honest.” Evidently miscommunication has worn the relationship thin.

The shortest track, appropriately, is “Smarter Ways of Saying It.” HUNNY encapsulates the feeling of a fleeting moment and how quickly relationships can come and go in the span of 65 seconds. Tired of thinking about the situation due to the weight of its pain, Yarger cuts to the chase, singing, “I fell out of love,” before it abruptly ends.

Bringing us back up to dancing speed, “Everything Means Everything Meant Everything” bounds into the mix. Goldstein’s guitar melodies lead us into what will surely be a hype mosh pit at live shows. The indie-rock quartet excels at providing concrete images and pulls us immediately into the sentiments of the track with the line “We trace our names on dirty glass.” Some of the synth and guitar riffs echo “Lulu, I’m Not Mad,” reminding us that not only are the lyrics cohesive as an album, but the melodies are too.

“Ritalin” — a plucky, laidback tune — seems best suited for car rides. More relational and personal disappointment peeks through with the lyrics, “I can’t see straight, see anything / And likely I’m hard to adore.” Then HUNNY finishes with one last former single, “Halloween,” switching to a lighthearted tone that’s also more realistic than any of the previous songs. Yarger speaks directly to the subject in plain terms: “You don’t think that I’m going to change” and “You underestimated ordinary words.”

Yes. Yes. Yes. Yes. Yes. available now ✌️ here’s some clips of touring and recording and life leading up to the release. thank you to everyone for listening and celebrating this with us 💜 https://t.co/JPqOK4Evsk

Ultimately Yes. Yes. Yes. Yes. Yes. deals with themes of distance and disappointment in relationships, whether romantically or among friends. HUNNY comes through in an honest way, giving us insight into idealized versions of their relationships and also presenting the oftentimes harsh realities that actually exist. Even though it can be easier to drift toward idealization, HUNNY ends on a realistic note, conveying that perhaps it’s easiest to move on once we’ve accepted the facts of a relationship rather than wishing for different outcomes. But they’re also here to help us through the journey of accepting reality.

Can your musical palette really be sweet without HUNNY? I’m not so sure… Stream their album now and be sure to follow them on social media @hunnytheband!