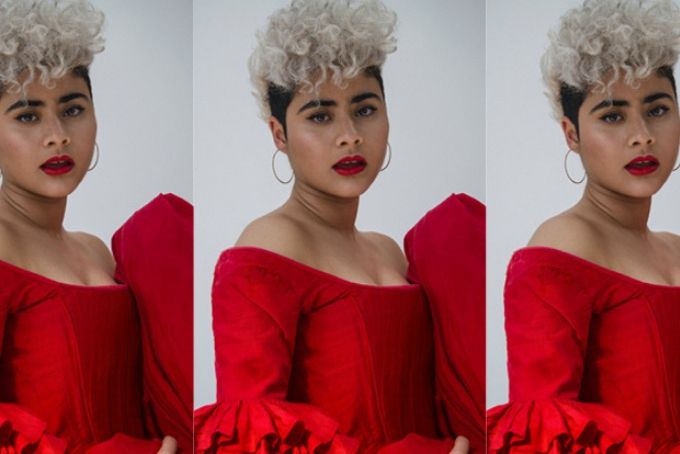 After dominating the music scene in Australia, singer/songwriter Montaigne is ready to bring her music to the world. The 23-year-old, Latin-Australian artist has already secured an ARIA award and her debut album Glorius Heights hit #1 most played on triple j. Now Montaigne is here with an incredible anthemic single: “Ready”. With a passion for activism that you can hear in her music, Montaigne’s an artist you don’t want to miss. Keep on reading for the inside scoop on this rising pop star!

What was the inspiration for your latest single “Ready”?

The track was inspired by the feeling of dissatisfaction I think people in many different industries feel when their work output or professional ability isn’t met by commensurate results rendered back. That was the initial inspiration, though I now perceive it through the lens of activism and those who are most disadvantaged by the political systems we are presently enduring.

The track itself is really hypnotic with many different elements coming through. Are there certain artists that you have enjoyed that have helped you craft a unique sound for pop?

The song itself wasn’t accompanied by many immediate references; I don’t remember making any in the session. Dr. R (the producer) banged it out really quickly and all I had to do was give guiding feedback e.g. I think it’s important we keep it sparse; yes, use that chord; let’s remove all harmonic elements in the middle eight, etc. Important childhood influences that have shaped my creative psyche are Feist, Regina Spektor, Fiona Apple, Björk and lots of pop icons like Kelly Clarkson, Christina Aguilera, Delta Goodrem… all the stuff that was flying around Australian commercial radio in the early 2000s.

By creating a track like “Ready” that discusses activism, how do you think music can help young people understand their role and importance in changing society?

That’s a good and interesting question I’m not sure I know how to answer just yet. Spitballing quickly, I’m not sure that music itself can help people better understand their role in changing society. Or at least that’s not been my experience with music in my life so far. What’s helped me understand a situation or system or anything better is reading books or having conversations with people who know better than me about these things or now in the digital age listening to podcasts.

I do think music can give people the courage or inspiration to act on their understanding, gives them a balm for better coping with adversity so that they can push on into the dawn. I think the thing music does best politically is to unite strangers. Community, togetherness, solidarity: these things are necessary to change society. Music is the thing that facilitates that coming together, especially in public spaces. Knowing and loving your neighbors is what authoritarian/neoliberal governments hate more than anything, because it is deeply threatening to their regime, which seeks to divide. Strength in numbers, baby. Music doesn’t deliver that understanding but it mediates the execution of that understanding. Again, spitballing, I might read this in a week and think otherwise. Que sçay-je? as my namesake said.

How was it working with so many collaborators on your upcoming album? What was the process like?

It was cool! It’s great to cross-pollinate with a bunch of different brains and personalities, and deeply satisfying when you discover a combination that meshes well, which is I think what happened with all the producers on this record. The process was pretty hodgepodge — the most consistency in music making and style I was able to maintain was with Tony Buchen, who I spent most of my time with and with whom I was able to pick a “vibe” for the songs we made (songs being “CHANGE,” “The Dying Song,” “Losing My Mind,” “Please You,” “Is this all I am good for?” [and] “I am a Clown”). Everything else sort of slots into the space delineated by these stylistic buoys on the sea of the album.

I love that you have been nominated as a Fearless Woman of the Year. What does a title like that mean to you?

It suggests that I’m fearless, I suppose, which is not, in fact, the case! Nobody is. The nice thing is that it must mean I come across that way — as bold and brave or something to that effect. I feel like I perhaps am less anxious or afraid of certain things that the average person might fret about. Definitely not fearless though. I’d say it’s the fear that motivates me to act to change things which rouse unhealthy amounts of fear.

After accomplishing success in Australia, how are you going to take the States by storm?

Oh gosh, I don’t know. That’s a question for my managers and marketing team to answer.

If you could perform live anywhere in the world, where would it be?

I wanna do a show in Brazil. I’ve been practicing/studying Brazilian/Portuguese and love the music and culture, and I also know that Brazilian people make up some of the world’s most enthused crowds.

Can we be expecting you in the States any time soon?

Hopefully! I try to make LA trips up regularly to song-write and to visit my loved ones up there,but in a show capacity I don’t have any certainty about when I might be able to play. Another question for my management/booking agent.

The title Complex for your upcoming album encompasses many different elements; what can we expect to hear from you on this project?

Oh gosh, so much. A dewy spiderweb of emotional crises and fraught relationships.

Who would be your dream collaboration?

David Byrne or maybe Silvia Pérez Cruz. And are Massive Attack still making music? I’m listening to Mezzanine at the moment and damn, ain’t that a great album.

Check out “Ready” below and keep up with Montaigne as she hits the States!