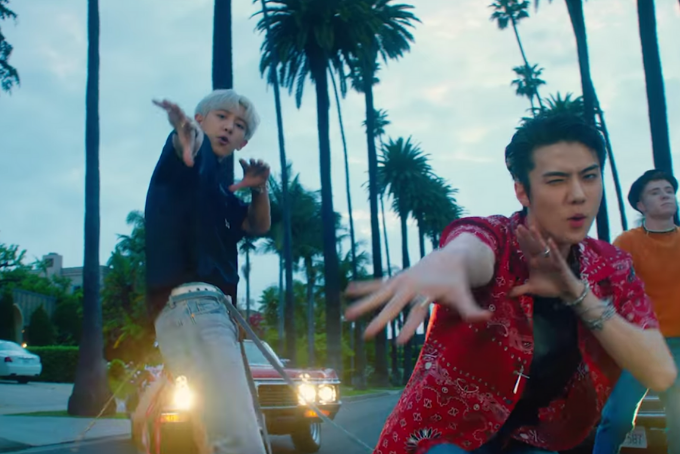 Chanyeol and Sehun of K-Pop group EXO, known collectively as EXO-SC have released their collaborative debut EP What a Life, on which the pair serves up chill, hip-hop vibes for the summer.

The album release was preceded by the titular single and music video. The eccentric hip-hop song reflects a carefree attitude about simultaneously working hard and playing hard.

“I work to play // I work as if I’m playing // What about you,” they sing in Korean. The addictive “What a life” chant in the chorus is certainly a catchphrase for the summer.

In the accompanying music video, the duo is living their best lives. We see them partying in a mansion, cruising on a yacht, and walking along the famous palm-tree lined streets of Los Angeles.

The next two songs, “Just us 2” and “Closer to you,” are title tracks as well.

“Just us 2” features rapper Gaeko, who also handled the overall production of the album. With quirky synths, the melodic track continues the laid-back theme as the artists contemplate their next adventure. “All we need is a passport,” they say.

The vacation never ends as they paint a picture of their tropical destination: “Under the cool ocean breeze // On the waves we surfin’ // Yeah yeah when the sun sets // We make a plan for tomorrow.”

The music video gives fans a behind-the-scenes look at the making of the album. They share shots of them having fun in the recording studio as well as scenes from their lavish music video shoot for “What a Life.”

The last title track, “Closer to you,” takes a romantic route. The sweet love song is an effortless blend of smooth harmonious vocals and sleek raps from the duo.

“Borderline” takes a bit of a serious note lyrically as they discuss the lack of progression from friendship to something more.

Despite the frustrated attitude of the lyrics, the song retains a relaxed vibe and is one of the most pleasant listens on the album.

The sweet romantic vibes continue with “Roller coaster.” On another unique synth track, (complete with screaming sound effects), the rappers make sure you have nothing to be scared of when you’re riding along with them.

The album closes out with the beautifully composed hip-hop slow jam “Daydreamin.” With delicate vocals and heartbreaking rap lines, the song details the ending of a relationship.

If you’re still searching for ways to cool down this summer, look no further than here. Chanyeol and Sehun had a major hand in the writing, composition, and production of the entire EP. The cohesiveness of the production and themes definitely don’t go unnoticed.

EXO-SC is the second sub-unit of EXO to debut with a record. This comes after EXO-CBX, which features members Chen, Baekhyun, and Xiumin.

The new sub-unit performed the new tracks for fans as part of EXO’s EXplOration Tour series in Seoul.

Listen to EXO-SC’s What a Life now: