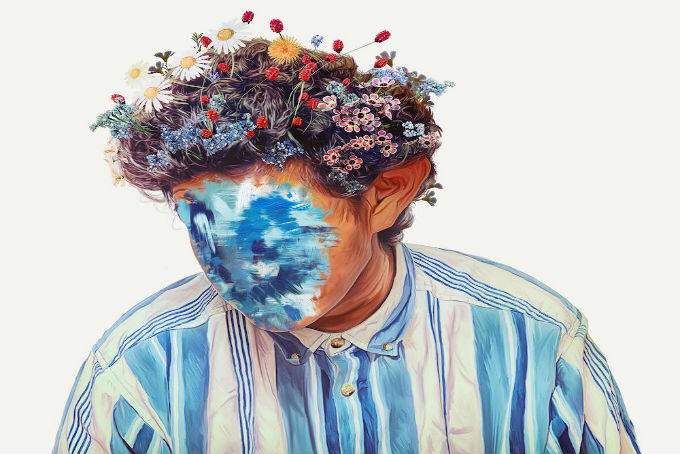 After bursting onto the scene last year and selling out countless shows, Hobo Johnson has started his latest era. After his Bonnaroo debut and release of “Typical Story” back in June, Hobo Johnson has released “Uglykid” featuring Elohim. The song discusses hating yourself and not wanting to exist while giving another person the entire world. Elohim opens the song with her beautiful vocals, giving the song a full sound, while Johnson raps between her hymns.

The music video for “Uglykid” gives a neon, beautiful vision of beauty and ugliness, showing bright colors and flowers alongside trash cans and dentist visits. The “Typical Story” singer also shows his “undying love” for another “person” (in the form a purple-haired mannequin). The video shows him having dinner with her, rubbing her feet and spending a night in together.

NEW ALBUM ANNOUNCEMENT: “The Fall of Hobo Johnson” can be preordered/presaved starting tomorrow & she’ll be out in the wild on 9/13. Dropping a new song tomorrow too called “Uglykid” to make you less sad while you wait. pic.twitter.com/LqktCNjjL6

The rapper who got into the heads of the world by having an unconventional Tiny Desk Concert for his track “Peach Scone” has also announced his second album. Following his debut album, The Rise of Hobo Johnson, the sophomore album titled — The Fall Of Hobo Johnson — will be released via Warner Brothers Records on September 13.

preorder my new album “The Fall of Hobo Johnson” today & get three new songs before album release day on 9/13. don’t sleep on me now. https://t.co/smpFXZ4oIR pic.twitter.com/tQ7sYkqPtE

This album will be a mix of songs and poems he’s been working on for the last few years. He also says he’s really proud of it and hopes that it makes everyone feel a little less alone and a little more like they want to stay alive. Watch the music video for “Uglykid” featuring Elohim now:

See the tracklist for The Fall Of Hobo Johnson below: