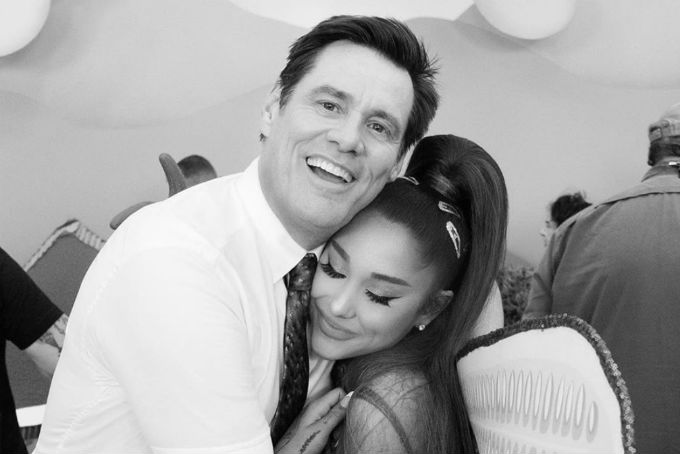 Ariana Grande is guest starring on the upcoming season of Showtime’s Kidding, which also stars Jim Carrey. The 26-year-old “Boyfriend” singer was the first to reveal the news in a lengthy Instagram post. She spoke highly of the opportunity to work with Carrey, who is one of her longtime idols.

“There aren’t words,” the pop star wrote. “I’ve been staring at my screen and no words do this moment justice. Thankful for the most special experience of my life. Nothing is crazier than getting to work with and spend time with someone whom you’ve idolized and adored since before you could speak…”

Carrey was equally excited to work alongside the pop starlet. At the Television Critics Association’s summer press tour, he took a moment to speak about working alongside Grande. “I just wanted to say this is really an exciting part of things. Admiration doesn’t just go kind of forward to an older generation. It goes backward as well. She’s a singular artist. She has a gift. She has a thing that she does that’s like magic. When she opens her mouth and sings, she’s just magical. And it’s nice to find out that she’s a lovely person and that she was so game and willing to do it and to put herself in a place of just being silly and innocent and fun. And she was just a breath of fresh air. It was a really lovely, lovely time when she got on the set.”

Much of the “Thank U, Next” crooner’s appearance on the show has been kept tight-lipped. However, the show’s executive producer and showrunner, Dave Holstein, did confirm to the Television Critics Association press tour crowd that Grande’s appearance includes a singing part and that her episode was “a visual departure” from the others.

“Every episode of the show we get ten episodes, and we try very hard to make every episode a different color of the rainbow and a different tonal choice,” Holstein said. “The one that she’s on is one of my favorite episodes this year because it is a visual departure and a really exciting and emotional choice that we made that she really sunk her teeth into.” He also praised the singer, adding, “I can say that she is lovely, and she sings. And there’s nothing more heartbreaking and beautiful than standing 10 feet away from Ariana Grande singing a song.”

This guest appearance on Kidding marks only one of a handful of acting appearances that Grande has had since her days on Nickelodeon’s Victorious and Sam & Cat. She previously starred in FOX’s Scream Queens for four episodes of its first season. It’s an exciting return for Grande to the small screen.

You can view the trailer for the upcoming second season of “Kidding,” which was revealed at the Television Critics Association tour, HERE: