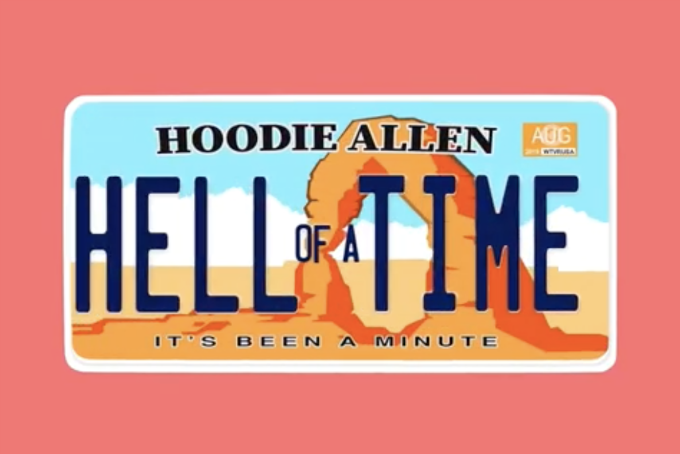 If you’re looking to have a “Hell of a Time,” you definitely need to check out Hoodie Allen’s new single. “Hell of a Time” is the third single off of Hoodie’s upcoming album, Whatever USA.

After releasing “Come Around” and “Never Going Back,” Hoodie Allen continues to serve good hooks and catchy choruses. “Hell of a Time” takes listeners back to the days of classic Hoodie. He even dropped a fun music video to accompany the song. Who says an artist can’t be independent and still drop the hottest tracks?

For Hoodie Allen, the grind never stops. Working hard without a label, he managed to put himself on the map in 2012 and has continued to do so. On August 2, he released “Hell of a Time,” which is part of his fourth studio album. Although the season’s almost over, it could be the song of the summer. The single has a catchy chorus that’s perfect to blast with the windows down. Singing about a lost relationship making him bitter, we think Hoodie’s words can connect with a lot of people. Also, as usual, his wordplay is on point.

As for the music video, Hoodie paid a bunch of people on the internet $5 to dance to his song. It ended up being a wonderful mash-up of all different types of dances. This even included someone ice skating to Hoodie! So even the music video matches Hoodie’s homemade vibe.

Either way, you can tell that the New York artist has fun with his work. It’s very obvious when musicians are producing work they love and know their fans will love. “Hell of a Time” exudes the type of honesty that is sure to connect with both new listeners and long-time fans.

With “Hell of a Time” being a sure-fire hit, we can’t wait for the rest of Whatever USA. Check out the album out everywhere on August 16. Additionally, a tour will accompany the album release.

Hoodie has even more tricks up his sleeves, raffling off golden tickets to his shows for life to lucky fans who preorder his album. There is no doubt that the Whatever USA era is going to be one for the books. With fun hooks and witty lines, we are ready for 2019 Hoodie.