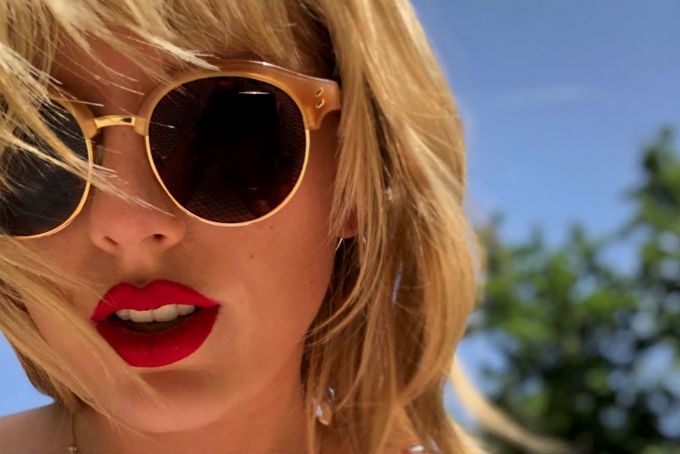 Taylor Swift is Vogue‘s September issue cover girl. Ahead of her seventh album release, Lover (out August 23), the 29-year-old revealed new details about the album, including two new track titles. She also opened up about how she felt in the wake of the Kimye feud, why her political stance was not public in the 2016 election, and her support for the LBGTQ community.

“Lover,” the album’s title track, was co-produced by Jack Antonoff. “This has one of my favorite bridges,” Swift said of the track. “I love a bridge, and I was really able to go to Bridge City.” The lyrics to said bridge are: “My heart’s been borrowed and yours has been blue // All’s well that ends well to end up with you.”

WELL SO THIS IS A THING THAT’S HAPPENING. September issue of @voguemagazine and I’m so so so grateful to Anna, @tonnegood, @sergiokletnoy and basically anyone who was like ‘yeah she can be on the Sept issue cover’. What an amazing experience shooting with @inezandvinoodh.

Swift also played a track called “The Man,” which “plays with the idea of perception.” Because the singer/songwriter has often wondered how she would be written and spoken about if she were a man, she wrote a song about being the man. “If I had made all the same choices, all the same mistakes, all the same accomplishments, how would it read?” She pondered. The chorus: “I’d be a fearless leader. I’d be an alpha type. When everyone believes ya: What’s that like?”

The “You Need to Calm Down” singer also opened up about a topic that was on everyone’s minds for a while: the Kimye feud. Many people who sided with Kanye West and Kim Kardashian in the 2016 feud called for Taylor Swift to be “canceled.” Of that phrase, Swift said, “A mass public shaming, with millions of people saying you are quote-unquote canceled, is a very isolating experience. I don’t think there are that many people who can actually understand what it’s like to have millions of people hate you very loudly. When you say someone is canceled, it’s not a TV show. It’s a human being. You’re sending mass amounts of messaging to this person to either shut up, disappear, or it could also be perceived as ‘Kill yourself.’”

Wanted to thank @abbyaguirre for writing such a thoughtful piece and for diving into my pastel cryptic world of hints, Easter eggs, and numerology. We also talked about sexism, equality, and all things Lover. I ate an entire cheese plate by myself. On stands soon-ish.

Of the 2016 election and her noticeably absent political stance, Swift offered an explanation, “Unfortunately in the 2016 election you had a political opponent who was weaponizing the idea of the celebrity endorsement. He was going around saying, I’m a man of the people. I’m for you. I care about you. I just knew I wasn’t going to help. Also, you know, the summer before that election, all people were saying was She’s calculated. She’s manipulative. She’s not what she seems. She’s a snake. She’s a liar. These are the same exact insults people were hurling at Hillary. Would I be an endorsement or would I be a liability? Look, snakes of a feather flock together. Look, the two lying women. The two nasty women. Literally millions of people were telling me to disappear. So I disappeared. In many senses.”

The “ME!” singer also elaborated on her positive stance to the LGBTQ community. “Maybe a year or two ago, Todrick [Hall] and I are in the car, and he asked me, ‘What would you do if your son was gay?’ The fact that he had to ask me … shocked me and made me realize that I had not made my position clear enough or loud enough. If my son was gay, he’d be gay. I don’t understand the question.”

She elaborated, “If he was thinking that, I can’t imagine what my fans in the LGBTQ community might be thinking. It was kind of devastating to realize that I hadn’t been publicly clear about that.”

The music video for “You Need To Calm Down” was extremely pro LGBTQ and it raised awareness for the Equality Act (Swift put a link in the video to a petition in support of the Equality Act that thousands of her fans signed). The song also draws attention to homophobes and protestors outside of the singer’s concerts in its second chorus.

I’d be a fearless leader. I’d be an alpha type.

You can read the full Vogue interview and see the photoshoot pictures here. Swift’s seventh album, Lover, will be released on August 23.