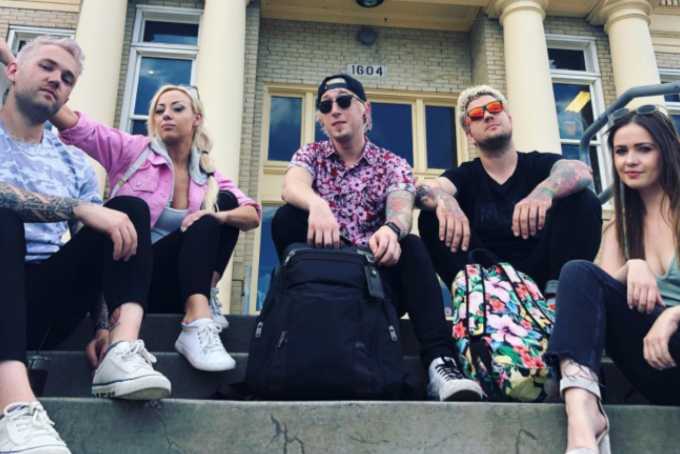 Fresh off a summer tour and showing no signs of slowing down, Paper Jackets is ready for the big-time. A sextet from Los Angeles, Paper Jackets started as a synth-pop band but hasn’t been content to stay in just one box. With an ambitious sound to match their ambitious lineup, Paper Jackets is a band that should be on everyone’s radar for 2019.

You say you’re “a band that exists in the in-between.” What does that mean?

You know…in-between friends and in between the highs and lows we somehow all found one another, our sound and our songs. I feel like LA is a place where you find a lot in passing and in the shuffle.

And while I’m asking you some of the sillier questions you’re probably tired of answering, where the heck did the name “Paper Jackets” come from?

I was looking at a collection of empty Stella Artois, which had those brown bags around them, and I thought that the bags looked like paper jackets. I’m apprehensive to tell that story, so sometimes when asked I’ll saying something else like Paper Jackets are those things around old vinyl records, which is kind of a boring lie of story.

When discussing your sound, some pretty successful names get thrown around, like Walk the Moon, CHVRCHES and Imagine Dragons. How would you describe your sound? And do you really pay attention to comparisons?

We like being compared to successful artists, but other than that I don’t really care about the comparisons. We are sensitive to the music being made and are focused on our own originality relative to the alt-pop world.

And, not to sound too much like a jaded music journalist, but synth-pop (one of the genres you’re frequently described as) is quickly becoming oversaturated. How do you plan to stand out?

I’m really glad you asked this question. I think we are becoming less and less “synth-pop.” However, that was very much the vibe starting out. Honestly, I came from a much more American Authors and Oh Honey sounding band before staring Paper Jackets, and at the time, synth-pop felt like a safe departure from the music that was starting to feel very dated. It’s funny now how we’ve been slowly departing from each landing spot, I ‘m hoping to stay alt-pop all the way. Sometimes, you gotta make two lefts to make a right and I think we’ve found our sound.

The comparisons are one thing, but I’m always interested, with bands like yours, in the influences—what are the bands that make Paper Jackets tick?

Early on, it was always 90s music: 3EB, Nirvana, Sublime, Silverchair. Then, for me, I bounced around the 50s and 60s treasure trove: Beach Boys, Frankie Vallie, Phil Spector.

I’ve found comfort and nostalgia in the 80s with bands, like Tears for Fears, Ah Ha, Cyndi Lauper, The Fixx and The Outfield. We like the good stuff from today, particularly Mother Mother, Chvrches, Alvvays, Grimes, Coast Modern, St. Vincent, The 1975, Misterwives, Joywave, Dreamers, Twenty One Pilots… the list really goes on. A lot of great artists.

You’ll be playing with X Ambassadors on August 3, and they’ve definitely seen a surge in popularity since the last time I saw them (opening for Panic! At the Disco in 2014!), are you excited for that show?

We are all very excited for the show! Phoenix has been really great to us!!

Had a blast at Selma 👒

Seeing that you have six members, I got curious and looked up some of your live performances and realized something—normally, bands are comprised of maybe three or four people but their live sound is compromised—your live performances are pretty much pitch-perfect. Was the larger band roster an intentional thing, or do you find yourself growing to match the sound you want?

It was not intentional per se—more out of necessity for the larger sound. We also don’t have a lot of roles doubled up, like a guitarist who sings or singer who plays guitar. Our drummer has the voice of an angel but no one ever hears him.

Going through your social media, it seems like you’ve been steadily raising your profile for the last year or so. What’s that ascent been like? Is it the rockstar dream or a lot of un-glamorous, unseen work?

I think things move gradually enough for us that we don’t think of ourselves as rockstars. Even if we become famous, I’m not sure how hard we will court the limelight.

When I was told about you folks, I was told you were a “band to watch for 2019.” So that begs the question—do you have any big plans for the bottom half of this year that you can talk about?

I’m almost certain we can get the hype necessary for a bigger release by the end of this year—at the very least a few singles. It’s hard to tell at this point how soon to wait to drop the record!

And a final question. There’s a lot of music out there (not just synth-pop, but in general). Why should the world care about Paper Jackets?

If you’re going to bother listening to alt-pop records, you should listen to Paper Jackets. Sometimes, seeing is believing. As for why, fantastic lyrics and melody choices, anthemic choruses for days, sometimes weeks, all the feels imaginable, bombastic rhythm layers and synth gleam!