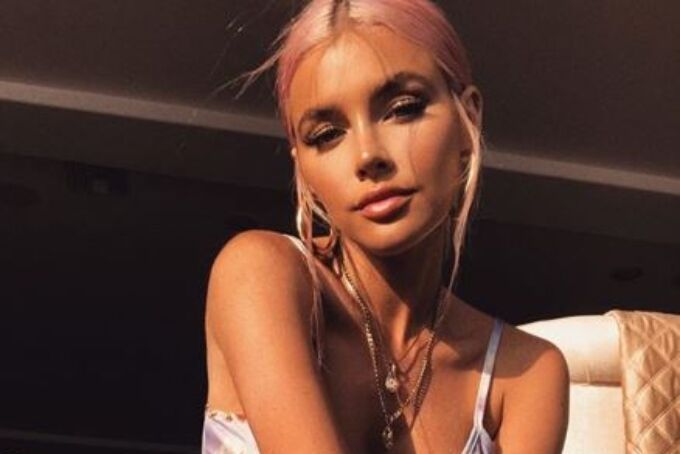 Showing her thousands of followers her love for music, Jean Watts is giving the world all she has to offer as she steps away from being a social media influencer and turns to furthering her musical pursuits with her newest single, “Evicted.” We were lucky enough to talk to Watts as she gave us the low-down on her inspirations behind the new music and what fans can look out for in the near future!

Hello Jean, thank you so much for taking the time to talk today. So, many people may know you from being a social media influencer; how has the transition been to singer/songwriter?

I always have been doing music. I unfortunately was in a couple bad deals and never wanted to talk about the underground problems that were happening. I was always very good at makeup and I used to do makeup for fashion shows to pay for my studio time. Thanks to social media, it’s much easier and quicker to be known for beauty looks then building a body of work that I felt proud enough to show to the world. Don’t get me wrong, I love makeup and all that — it’s another art and form of expression to me — but when people believe I just woke up one day deciding to sing, they couldn’t be more further from the truth. I believe this phase will go away eventually.

If you had to describe your sound to someone who hasn’t heard your music before, what would you say?

Honestly, I don’t know how to describe my music — sound in a basic answer. Every song has its own “thing.” It’s different shades of me and none are exactly the same. I think that’s what makes this project so special. You’ll get a little piece of everything.

How did you get into music and songwriting?

My mom was a singer and my dad was a musician. Both were amazing. I picked up both from my parents. I played piano by ear growing up, sang in choir since I was in 3rd grade. I started writing songs on the piano with no lyrics when I was about 10. I started adding lyrics to the music I wrote in high school. High school was when I knew I wanted to pursue music. When I graduated I started working on recording in a friend’s basement in the southside of Chicago. I showed my aunt some of my music and she showed it to a friend who owned a label. I started working with that label, but when it came to the contract, things fell through. After that, I posted a video of me singing on Facebook. It got a bunch of shares and that’s when I was asked to sing at a Chicago festival. After the festival I moved to LA and that was a roller coaster in itself. Its been A LOT and a long journey, but I would do it all over again to get to where I’m at now.

Can you take us through your process of writing a track and where you gain that inspiration?

There’s really no one process for writing a song. There’s times when someone plays the guitar, which is my favorite way. I love how open it is and I can go wherever I want melody-wise. I’ll usually grab a mic and start mumbling the melodies I hear. We piece it together and then start going after the lyrics based on how the song is making me feel. Inspirations can be from anything. My life, other peoples lives, cool concepts, movies, dreams etc. After we cut the song, we’ll then sit with it and that’s usually when I start ripping it apart and then piecing it back together. That’s how I process my songs and how I know I like them. Then it will take days of perfecting little stuff with the song, making sure it’s right. Then mixing and mastering, and then the world gets to hear!

And, you’ve recently put out two new singles: “Feel The Same” and “Evicted.” Congratulations! How does it feel to put out pieces of work that can be listened to and seen by thousands of people?

It is the greaaaatest feeling, especially since it’s been years and years of hard work — ups and downs. It feels good to finally be known as an artist and to have people hear the hard work and heart you put into something. The connection that people have with the songs are so addicting and when people tell me that they connect with the song with their own personal life, I feel so fulfilled.

What’s the meaning behind this newest single, “Evicted,” for you? What do you hope fans take away from it?

“Evicted” is my second single produced by Macgregor Leo and co-written by Geena Fontanella. It’s a song about being emotionally abandoned by your loved one. I experienced that from my past relationship and it still to this day crushes me thinking about how it made me feel. I hope people can connect to the song the way the song makes me feel. My favorite people on the planet are the people who do connect.

Now the video for “Feel the Same” is a little emotional; what was the inspiration behind it?

The video starts with me and my boyfriend hitting a hard situation with our car broken down in the middle of nowhere. We end up fighting and he leaves me there. I then hit my breaking point of dealing with it all and end up blowing up the entire car. Cameron Goold and Nick Dean directed the video. When they called me about the concept I just fell in love. I feel that video is so beautiful and describes the song so well. It’s so relatable to how I’ve felt and how other people feel. When things get really hard, it’s like, “F*** this! I’m done!” The whole concept is literal and also metaphorical with the meaning. The smile towards the end is one of my favorite parts of it, because it’s the moment of gratification of taking control of your life and letting go of all the things you bottle up and letting them out and feeling that internal peace of freedom. It’s empowering, real and badass.

And the visuals for “Evicted” were also super cool and a little trippy; are we going to get a music video for it soon as well?

Ah thank you! It was shot by TheManUC and edited by me. We actually weren’t going to do a video for that song. When I was messing with some cover art and promo pictures, I started editing the video content we got from a photoshoot. I thought it was a really cool visual video and gave the epic effect of how the song makes me feel sonically. I don’t think we are planning on doing a music video for this song, but we have a little something else we’re going to release!

Is there an album or EP in the works?

We have a really cool project in the works and it’s fire! I can’t wait to put it out.

Do you have a tour or any shows coming up?

After we drop the EP, we are planning on doing a small tour and some shows off of it.

I’ve been working super hard on this music and can’t wait to show the world!

You can watch the visuals for “Evicted” here: