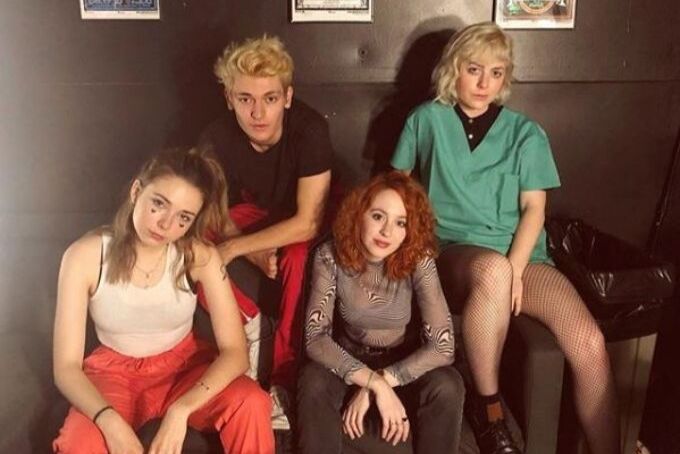 After two years The Regrettes have released their second full-length album, How Do You Love? This 15-track album includes dance-enabling beats, sassy lyrics and self-empowerment. The punk rock band is comprised of Lydia Night on vocals, Genessa Gariano on guitar, Brooke Dickson on bass and Drew Thomsen on drums; together, the quartet has crafted a portrait of love at every stage.

The album begins abruptly with a heartbeat. How Do You Love? literally pulses to life with track one, “Are You in Love? (Intro),” which consists of honest, vulnerable poetry that Night directs at the listener. It’s full of questions — an attempt at diagnosing you with an unstated condition — until Night finally states what your condition is: “If you said ‘yes’ to all the things above, then yes, my friend, I’m sorry; it appears you’re in love.” Immediately, the second person voice plops us into the rest of the album’s roller coaster. As an opener, the track was cleverly done.

“Do you like the freckles on my face?” Night inquires in the next track, “California Friends.” It’s all about determining whether you like someone or not and whether that person’s opinion really matters to you. It’s hard to determine how compatible you are with someone when you first meet and are trying to figure out their personality; the fickleness of the lyrics is complemented well by Thomsen’s alternating cymbal and kick drum work, paired with Dickson’s urgent and ever-present bassline. The punchy vocals and Gariano’s guitar riffs set the stage perfectly for the punk rock mood that can be expected from the rest of the album.

The happy-go-lucky “I Dare You” melody could probably send anyone into a dancing frenzy, and for track three, that’s a pretty good place to be. The Regrettes even had a cute, synchronized dance in the music video, which they have a tutorial for. When they posted the video, they also encouraged people to remake the dance and tag them on social media. After you start bopping to the song, I highly recommend learning the dance. At this stage in love, you’re willing to start a relationship and it has sprung on you against your will. “You’re gonna fall, but I’ll catch you” is the insisted phrase that repeats throughout the track. It’s definitely one of the most memorable tracks.

“Coloring Book” is a stupor of contentment. So much so that even clichés are alright, like walking along the beach or humming sweet nothings (in this case, “Open up the window and sing with the bees.”) The guitar croons out melodies with soft earnestness; it’s a mellow complement to the previous song’s frenzied ecstasy. Love is new and exciting. “Fog” continues this infatuated narrative and questions how the attachment grew so intense so quickly. These songs act as a pause in the narrative to check that there’s really a desire to commit to love.

While there are direct references to Night’s boyfriend — Dylan Minnette of Wallows — in “Pumpkin,” it also describes how a relationship has moved from pure attraction into an eagerness to be around for the other person no matter what. “I know co-dependency has dragged me out, but I really don’t think that’s what this is about,” Night sings. A large part of relationships is sacrifice and that becomes more apparent as the album progresses.

“Stop and Go” is another fun musical romp that starts off with Night’s vocals and an acoustic guitar part, followed by a classic punk rock composition. Even though it’s upbeat, there’s a hint of tension that begins breaking through in the juxtaposition of “stop” and “go”; a tension that’s then exacerbated in “Dress Up” and “Dead Wrong.” Night’s sultry vocals in the latter, coupled with the steady bassline is even reminiscent of ’80s music in flavor, like it could be straight out of The Breakfast Club.

The next couple songs — “More Than a Month” and “Go Love You” — are sassy zingers regarding long-distance and dishonest relationships, respectively. Night’s raspy, saucy vocals are perfect for delivering heated messages and many women will be happily singing along to these at concerts. It also presents listeners, especially adolescents, with an important lesson: stand up for yourself when you’re being taken advantage of or treated unfairly; don’t let injustices slide.

On the other side of love, sometimes relationships need to be relinquished and that’s for the best, like the speaker and subject’s relationship in “Here You Go.” The tension of love starts easing up with “The Game,” as the anger and hurt starts to subside from pure tiredness and, actually, love. Imagine that.

The final punch, with a bass and kick drum-heavy musicality to match the feisty lyrics, is “Has It Hit You?” The penultimate tune represents detaching from someone else entirely, because no one deserves to let negativity simmer nearby and pull them down. It stuck out as my favorite because it held a heavier composition than the other songs, which made it a stand-out, and Night’s confidence is so radiant in the lyrics that it’s infectious and empowering.

As a perfect album closer, “How Do You Love?” encapsulates how confusing and complicated love is. Because even after 15 songs, even The Regrettes can’t tell you what love is; you’ll to find out for yourself.

The album moves at a steady pace that keeps listeners attentive, along with the sassy, moody attitude we’ve learned to expect from the band. Since love is a general sentiment we’re all familiar with, the album flies by — we know what to expect out of a love narrative and The Regrettes hit every stop on that narrative in the best way possible, tugging at our heartstrings and turning our minds toward present or past relationships. It sure is a fun journey to go on with this fun-loving quartet; try out the album now!