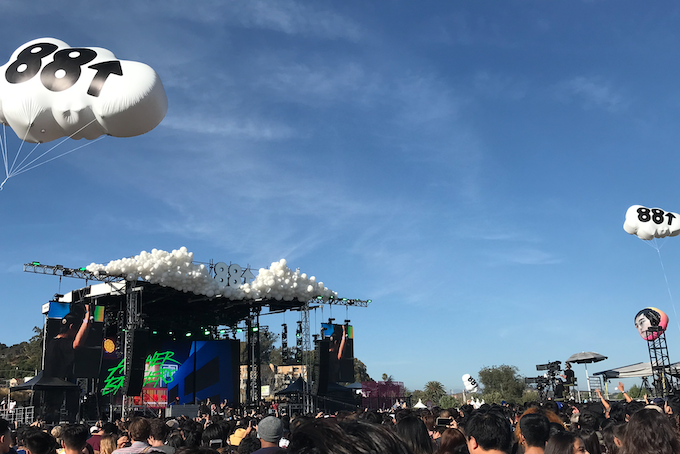 With the increasing popularity of Asian and Asian-American artists in Western pop culture, media collective 88rising has been at the forefront of the movement.

The label’s second annual Head In the Clouds Festival took place once again in Los Angeles. Dubbed by fans as the “Asian Coachella,” this year’s show was bigger and better than ever. Drawing 25,000 festival-goers — a much larger crowd than its inaugural show — the concert featured a wide variety of Asian acts. 88rising’s own NIKI, Rich Brian and Joji took the stage to share their talents, as well as new-timers, including K-pop group iKON and Korean rapper DPR Live.

One of the first acts to perform were 88rising’s Higher Brothers. Hailing from China, the high-energy hip-hop group performed hits, including “Made in China” and “Lover Boy 88.”

Indonesian singer-songwriter NIKI didn’t waste any time showing support for her native country as well as Asian female representation. Celebrating Indonesia’s Independence Day, the R&B singer opened her set clad in red & white (the country’s flag colors) and sang the national anthem. As the first female artist signed to 88rising, NIKI shared some poignant words during her set: “As an Asian female, I don’t take this for granted.” She added, “I hope you feel heard, understood, but above all, represented.” The artist sang hits, including “See U Never” and “Vintage,” but also debuted her brand new song “Indigo.” Released just a few days before, the crowd still managed to sing along to the R&B summer jam.

As one of the most highly anticipated performances of the night, K-pop boy band iKON took the stage for their debut west coast festival performance. Since it was the group’s first time performing in L.A., fans camped out beforehand, hoping to be as close to the guys as possible. As the sun set over Los Angeles State Historic Park, iKONics lit up the night with the group’s baseball bat-shaped red light sticks. During their set, the boys took time to address the crowd and paused momentarily to check on a fan that had possibly fainted. To no one’s surprise, the crowd was at peak hype when the sextet performed their biggest hit “Love Scenario.”

His first performance in months, Rich Brian took the stage next and opened with “Rapapapa” off his new album The Sailor. He told the crowd he had missed performing before running through his killer set. Performing fan favorites, such as “Dat $tick” and “Gospel,” as well as new hits, including “100 Degrees” and “Drive Safe,” the rapper didn’t miss a beat.

It’s hard not to be entertained by internet-sensation-turned-musician Joji. As the headliner of the night (and despite tonsillitis), the singer didn’t disappoint. He managed to freestyle about his sickness and drinking water, which prompted the crowd to chant “water” intermittently throughout the rest of his set. His moody setlist included hits such as “Yeah Right” and “Sanctuary” and closed out with “Slow Dancing in the Dark.”

Closing out the night, the 88rising crew — including August 08, Dumbfoundead, NIKI, Rich Brian, Higher Brothers and Joji — took the stage once again for a few encore performances. They also performed their collective hit “Midsummer Madness.”

A festival dedicated to the celebration of Asian pop culture filled with amazing acts, good food (thanks to 626 Night Market) and interactive exhibits was a day to remember. We can’t wait until next year!