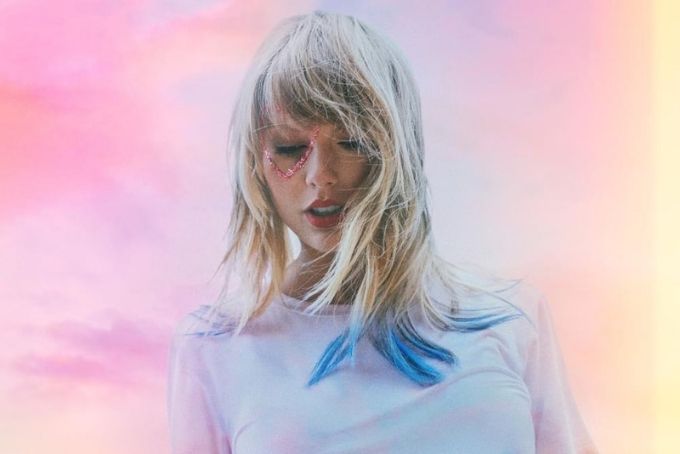 In case you haven’t heard by now, Taylor Swift is a lover, not a fighter. Her seventh album, Lover, was released on Friday and, as Swift says, it’s all about “the things [she] loves.”

Lover is a sunny punch of pop music; quite the turnaround from the darker, hip hop-inspired beats from her last album, reputation.

The album opens with “I Forgot That You Existed,” a bouncing, cheerful tune that declares her utter indifference to any and all haters. There’s no malice behind the lyrics of the song, which sums up Swift’s mindset in this album cycle. All of the feuds and controversies are left behind as she finds peace in letting it all go.

“Cruel Summer” takes the vocoder instrumentation she and longtime collaborator Jack Antonoff have been playing with for years and cranks it to a new level. Written with Antonoff and St. Vincent, the song details her struggle to keep her relationship a secret, even while she wants to scream, “I love you / ain’t that the worst thing you ever heard?”

Her latest single, “Lover,” is a dreamy, vintage-sounding song that could be straight out of the end credits of a rom-com. In typical Taylor Swift fashion, the song is packed with small details that make the song all the more intimate. Christmas lights in January never sounded so romantic.

“The Man” cuts straight to the point: “And I’m so sick of them coming at me again / ‘Cause if I was a man, then I’d be the man.” Swift expands on this theme throughout the lyrics, positing that if she was a man who’d made all the decisions she’s made in her life, she’d be seen as a baller and a player “just like Leo / in St. Tropez.”

Swift released “The Archer” a few weeks back, but it still cuts deep. A traditional “Track 5” song, it explores Swift’s own insecurities as she wonders, “Who could ever leave me, darling? / But who could stay?” It’s a rare public moment of self-doubt for the singer-songwriter, which makes its presence on the album all the more poignant.

“I Think He Knows” is a pitch-perfect description of how obsessed you can be at the beginning of a relationship. “It’s like I’m 17, nobody understands,” Swift sings over a skittering beat and finger snaps, but anyone who’s ever had an all-consuming crush will definitely understand her bold declaration of “I want you, bless my soul.”

This past year we’ve seen Swift find her voice in the political arena, but with “Miss Americana & The Heartbreak Prince” she’s gone beyond simply posting on the Internet. This track is a dark metaphor for her disillusionment with today’s America. The lyrics describe a gothic-sounding high school, complete with eerie cheerleader shouts of “Go! Fight! Win!” but a closer look at the lyrics shows Swift’s disappointment with “American glory / faded before me.”

“Paper Rings” is an exuberant burst of energy, declaring Swift’s intentions to marry her lover, even if it’s with paper rings. “The moon is high / like your friends were the night that we first met,” she sings in the very first line; the rest of the song’s just as gleefully out of control. Loaded with “hey! ho!”s and an excited Antonoff shouting “1-2-3-4!,” this track is a Jimmy-Eat-World-meets-Lumineers blast of fun. “I want to drive away with you,” she coos and you can practically see Sandy and Danny taking off in that flying car.

“Cornelia Street,” one of the few entirely self-written tracks on the album, is Swift’s memories of the beginning of her relationship, most of them taking place in an apartment she rented in New York on (you guessed it) Cornelia Street. “I hope I never lose you, hope it never ends / I’d never walk Cornelia Street again,” she muses, and while the chorus describes the fear her lover will eventually leave, the verses tell small stories that show us he’s not going anywhere.

Swift usually draws on her own life to write songs, but on “Death By A Thousand Cuts,” she was inspired by the Netflix movie Someone Great. Sonically, it’s upbeat, but a closer listen to the lyrics tells a heartbreaking tale. “You said it was a great love, one for the ages / but if the story’s over, why am I still writing pages?” She sings the hurt so convincingly, you almost forget the rest of the album details how happily in love she is.

“London Boy” is a dubstep-influenced ode to all the things Swift loves about London, including the boys. The chorus is a sing-songy earworm that namedrops London neighborhoods and details traditionally British activities, like drinking in the pub, high tea and strolling Camden Market. She also refers to herself as a “Tennessee Stella McCartney” — a winking reminder of her current fashion collaboration with the designer.

“Soon You’ll Get Better” is arguably the most raw song on Lover. The song is a beautiful ballad for Swift’s mother, whose cancer returned earlier this year. “You’ll get better soon / ’cause you have to,” Swift sings wistfully. With background vocals from the Dixie Chicks and a twanging banjo, this song’s reminiscent of Taylor Swift herself, circa 2007.

Prefaced by a saxophone solo (trust us, it works), “False God” is a religious-heavy metaphor for a relationship. Swift seductively croons, “I know heaven’s a thing / I go there when you touch me, honey / hell is when I fight with you,” before drawing a parallel between asking for forgiveness after a fight to going to confession. It’s a different vibe for Swift, but one she’s been fine-tuning since reputation tracks “Dress” and “So It Goes.” With “False God,” she hits the mark.

“You Need To Calm Down” was the second single off Lover, accompanied by a celebrity-cameo-filled music video. On this track, Swift addresses the homophobes and haters alike: “You’re being too loud / You need to calm down.” This song marked Swift’s first musical political statement with a shout-out to LGBTQ+ organization GLAAD and the fan-favorite line “‘Cause shade never made anybody less gay!”

In “Afterglow,” Swift describes her own self-sabotaging tendencies in relationships before offering an apology: “Hey, it’s all me in my head / I’m the one who burned us down / But it’s not what I meant / Sorry that I hurt you.” The production gives this track a larger-than-life feeling, making Swift’s apologies seem all the more significant.

Love it or hate it, “ME!” is undeniably catchy. As the first single released from the album, many worried that the entire album would sound this relentlessly, almost annoyingly optimistic. However, when placed in the context of the rest of Lover, “ME!” fits into Swift’s overarching narrative of love, including love for yourself. The lyrics might not be deep, but the song has widespread appeal.

“It’s Nice To Have A Friend” is a dreamy, low-key story of a childhood friendship that eventually turns into a long-term relationship. With steel drums and a backing children’s choir, this song’s unlike anything Swift has ever done before. No intricate production or layered metaphors, just a simple tune and a simple story.

“Daylight,” the final song on the 18-track album, is Swift ruminating on her previous struggles and relationships before finally declaring, “I once believed love would be burning red / but it’s golden / like daylight.” The spoken word outro sums up the theme of Lover perfectly, with Swift musing, “I just think that you are what you love.”

Lover‘s Swift at her best: giddy, clever and still utterly in love with love. While reputation was a triumph, Lover‘s a beautiful reminder that nothing is more freeing than focusing on the things you love.