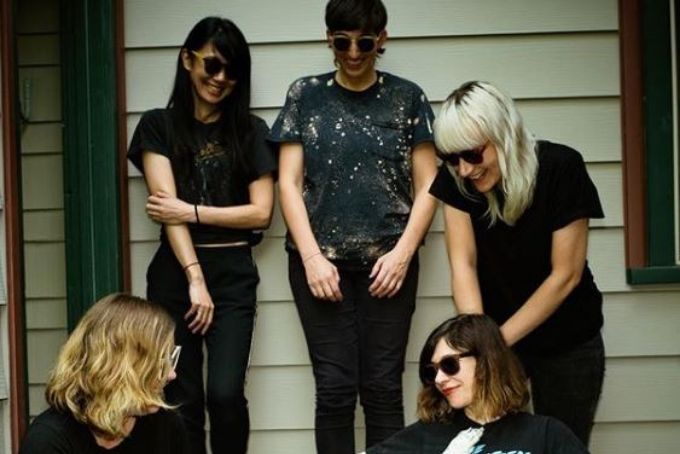 There’s no use crying over spilled milk.

But according to the latest Sleater-Kinney music video, you might want to fight over spilled coffee.

Tinged with perfect, mid-90s art school feminist weirdness, the music video for Sleater-Kinney‘s “Can I Go On,” is a wonderful call back to the group’s riot grrrl roots while still showing the obvious growth that the band has undergone in the last two decades.

A fun, if not slightly confusing black-and-white romp through the thoughts and desires of two middle-aged women, “Can I Go On” isn’t too deep. There might be symbolism or a story, but throughout watching the video (scored to the more slick and pop-leaning single off of The Center Won’t Hold), one gets the sense that the point of this video was more about the visuals than anything else.

Most unusual (though welcome) is the focus on middle-aged women. Rock music isn’t exactly known for “respecting women” or “gender equity” and typically if there are going to be women wrestling in mud, they’re going to be young, tight-bodied ladies, not matronly women sipping coffee in a cutesy ’50s sitcom. It’s a nice subversion of the typical rock music video and as the members of Sleater-Kinney approach their fifties, it seems to be a very pointed, intentional one.

Older women can be cool, too.

And that’s another important distinction to make — these women are cool and fun, but aren’t subjected to the male gaze. The video isn’t, despite the mud wrestling, inherently sexy. Instead of these women wrestling for the viewer’s pleasure, they seem to be enjoying themselves, unconcerned with who’s watching. And after the mud wrestling, there’s plate breaking and interpretive dancing — and our main heroines seem to be enjoying it thoroughly. As a viewer it’s a little uncomfortable, but again, it doesn’t exactly feel like this music video was explicitly made for us.

And then comes the end of the video: the revelation that none of this weirdness was actually happening, but instead was what these women wanted to do. As the mud seeps from their mouths, it’s a nice statement on repressed sexuality and desires, especially in an older generation. Again, it’s not particularly deep, but it gets the point across.

As Sleater-Kinney make their triumphant return, it’s nice to see that while some things change, others stay the same. And the feminist weirdness of this music video was a nice reminder of this band’s roots.