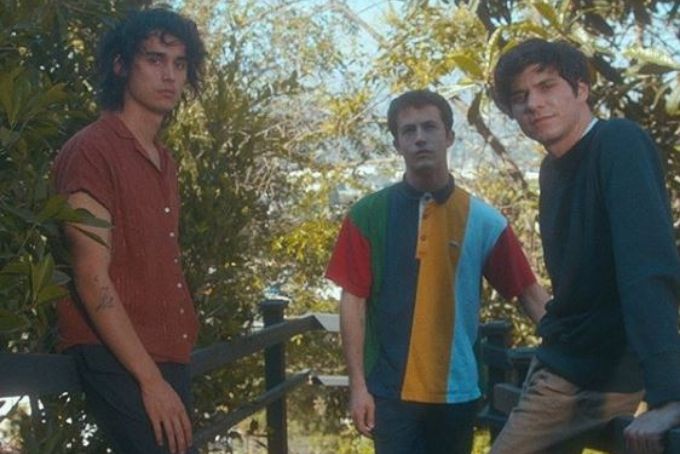 In “Trust Fall,” Braeden Lemasters takes the lead on the vocals. Together, Lemasters and his fellow band members, Dylan Minnette and Cole Preston, created a song about trusting someone over losing something special. Ultimately, it’s about busting a head after trust falling with someone. Yet Lemasters sings, “Don’t want this to change / Don’t shake me awake.” There’s no doubt we’ll be belting along to lyrics like “I know what you want / Destined to stay young” and “Can we finish the feeling that we started?” Lyrics about euphoric young romance and risk are what this trio delivered and we’re all here for it.

Along with this double-whammy single release, Wallows also posted a lyric video for “Trust Fall.” The silly D.I.Y. video features Braeden and Cole wearing matching outfits (along with sunglasses, inside). During the video, the two jump back and forth on their hotel beds in slow-motion. During the outro, we get a clip of Braeden singing along while having popcorn thrown in his face. Fun fact: their lyric video for “Trust Fall” was filmed in Nashville on their current tour!

Wallows released their newest album, Nothing Happens, last March. In an interview, the band revealed that both “Trust Fall” and “Just Like A Movie” were recorded during the same recording session as the album. These two singles just didn’t make it onto the album. The band elaborated on the pairing of these two songs for simultaneous release: “When we were coming up with the tracklist for the album, we felt like these songs fit together in their own unique way and started to think of them as a pair that could exist on their own as singles.”

excited to be hitting the road again tomorrow with our friends @RemoDrive. a few tickets left for Nashville, Cleveland and Tulsa, and VIP tix still available in Kansas City. see u there 🐙 pic.twitter.com/YNBEzXRbn6

Wallows are currently on their Nothing Happens US Tour Part 2 with emo/pop-punk duo Remo Drive. Make sure to catch them on their last leg of this tour and at Tropicalia Festival in Los Angeles.