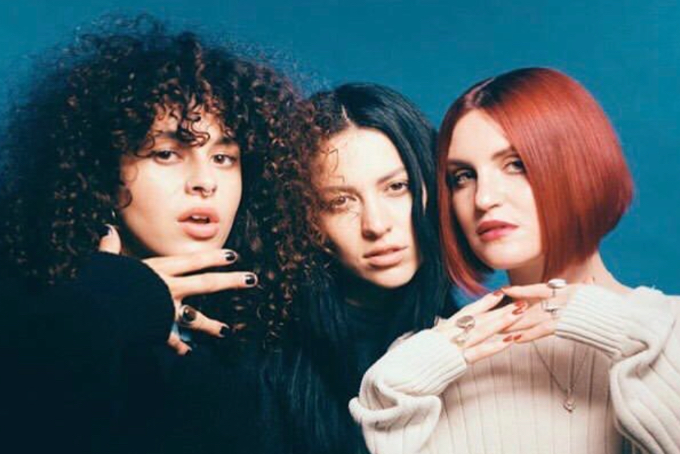 MUNA begin their second album with pleading words — “I want to grow up,” lead singer Katie Gavin hauntingly begs of herself. It’s a fitting opener for the band’s latest LP, Saves the World, and perhaps a testament to their creative development as a trio.

When they teased the vibe of their upcoming release with lead single “Number One Fan,” a 12-track story about self-love was expected. MUNA effortlessly lit a figurative fire in their fans — they had us exclaiming to our reflection that we were our biggest supporters. It goes hand-in-hand with “I Know A Place,” the inclusive anthem from their debut About U that incited hope for the LGBTQ+ community.

Despite its moments of utter euphoria, heartbreak needles its way to the forefront alongside a high-energy beat that toes the line between dancing away the pain and crying alone in your bedroom. Tracks like “Stayaway” and “Who” are heavy, weighing on the heart and begging the ever-demanding question after a breakup: How do you forget the one you love?

They endure an existential crisis in “Never” — “I don’t know if I like songs, I think maybe I was wrong,” Gavin croons. She eventually treads into a chanting chorus that makes a bleak confession: “I’ll never sing again.” It’s difficult to conjure up a world without MUNA, an openly queer band writing songs for their fellow community.

The trio expands on its dark-pop-infused sound — “Pink Light” and “Taken” are eerie while maintaining a rightful pop glow that resonated strongly on their 2017 debut. But the two main standouts differ strongly from each other, proving MUNA’s versatility and willingness to thrive among electro-pop greats.

“Hands Off” is a certified pop banger, reminiscent of a ’90s dance floor classic. Gavin wants nothing more than to give into the unwavering attraction of a past love, but she knows better, begging for distance and closeness at the same time. Then there’s the deeply revealing “It’s Gonna Be Okay, Baby.” It features an unusual six-verse story with Gavin recalling her tumultuous journey through adulthood. She lists all the ups and downs — relationships, friendships, depression, drug addiction and suicide — while comforting her future self that it’ll be alright. It’s the ultimate love letter to oneself and the kind of reassurance a struggling young adult would need in times of deep soul searching.

MUNA aren’t afraid to scrape away at their feelings, unveiling dark thoughts and airing out buried insecurities. There’s importance in that — women baring their souls and becoming vulnerable in an industry that fears persistent female strength. MUNA are doing what their album set out to accomplish in the first place — saving the world.