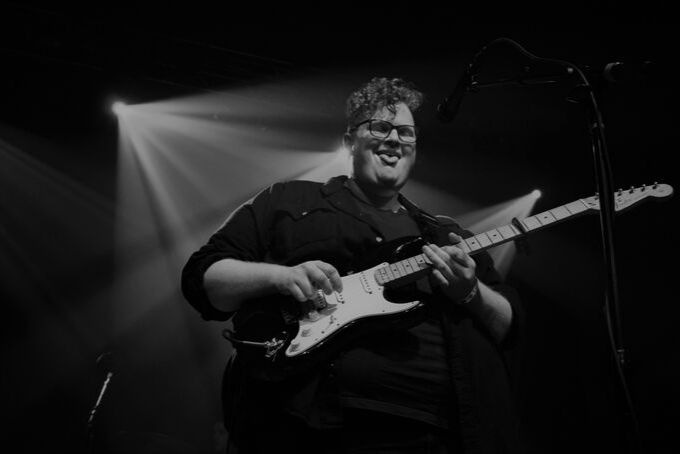 Jason Singer‘s alternative rock project, Michigander, has been producing music for a few years now and his work’s picking up momentum. Last year, he released Midland, his first EP, named after the town he grew up in. This past Friday, September 13, he released his second EP, Where Do We Go From Here. The 5-track release centers on uncertainty and the fear of disconnection from loved ones as a musician.

Singer held an EP release concert in Pontiac to celebrate, alongside three Midwestern openers: Kimball, Rival Summers and Bad Bad Hats. Kimball kicked off the party with an indie-pop jam session, full of silky harmonies, cymbal-led rhythms and unanimous head bobbing. They infused the room with a joyful energy that set the tone for the rest of the evening.

Rival Summers matched that energy and then some. With infectious smiles and words of gratitude, they spent their set engaging with their audience, maintaining the room’s excitement and making sure everyone felt valued for attending the show. Leo Bautista — the frontman, pianist and guitarist — captivated the room with his earnest and vulnerable croonings, while also getting everyone hype from where he stood atop the piano for upbeat songs. Later, he jumped into the audience to sing alongside his fans, making the set even more personal.

Bad Bad Hats brought a dreamy mood to the room through Kerry Alexander‘s ethereal-yet-emphatic vocals, insistent bass lines and fluttering streams of acoustic guitar. Alexander eased the room with her endearing sense of humor over her hometown in Minnesota and her inexperience with drugs, which was the perfect premise for her song, “Nothing Gets Me High.”

Singer took the stage around 10 P.M., eagerly exclaiming, “Hello friends!” as he and his band enveloped the venue with their opening song, “Poplar,” which is also the opening track off the new EP. The set was a good combination of old and new songs, oscillating between upbeat singalongs and solo, intimate tunes, including “Safe,” when Singer took the stage alone and quieted the room, singing about failure and comparison. “I’m doing what I love // While you’re doing what you’re told // I know it’s safe, but I bet that’s getting old,” he sang to affirmative cheers.

The celebratory occasion was as much about gratitude as it was about the new tunes. Singer introduced each of his touring bandmates — Jake Lemond, Connor Robertson and Aaron Senor — and made sure they each received their due applause, as well as the opening bands and one of Singer’s industry friends, who’d secured the venue for the event. “Keep following your dreams,” he urged.

Family played a big role for Singer in his gratitude, too, especially while performing the closer on Where Do We Go From Here, “94.” It’s a vulnerable song about touring and what will inevitably be missed through the process. With lyrics like “I’m so sorry I wasted your time” and “Well, my brothers are getting married // They’ll be starting their families while I’m out on the road,” Singer filled the silent room with relatable longing for long-distance relatives and friends.

The night ended with a roomful of happy cheers for an encore, dozens of black balloons in classic Gander fashion and plenty of hoots, hollers and thank you’s to go around. Simply put, this show was a big moment for Singer and the project he’s been working tirelessly and courageously on for the past few years. It takes a lot of faith and patience to develop a name as an artist, and after the beautiful products he’s created thus far, we think Singer’s fellow Michiganders are truly grateful that he hasn’t given up on his passion.

Here’s to spreading the joy of Michigander far and wide. Listen to Where Do We Go From Here now: