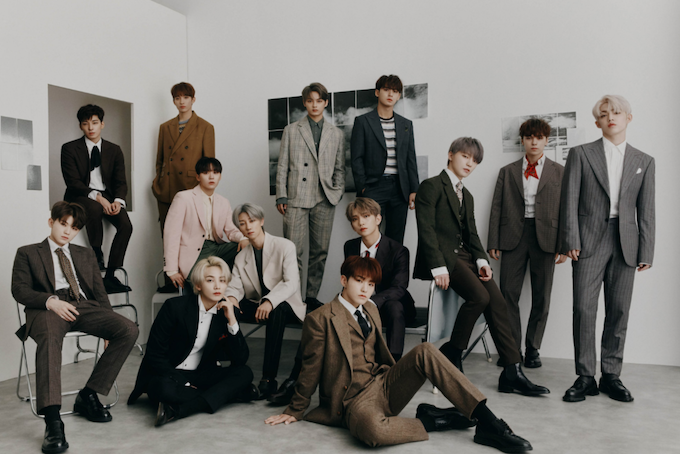 K-pop boy band Seventeen have returned with their new album An Ode. The 11-track album features 10 new tracks plus a Korean version of their Japanese single “Happy Ending.” The project was preceded by the release of their late summer jam “HIT.” Their title single and music video for “Fear” was released alongside the album. The 13-member group has traditionally played a major role in the songwriting and concept development of their music and it’s no different this time around. Many of the members are credited as co-writers and producers on An Ode.

The new album showcases many genres and many of the songs stay true to the classic Seventeen sound but also introducing new, dark and mature concepts.

Their title single “Fear” is the best representation of the group’s experimental and evolving vision. The single is co-composed by member Woozi and the group’s frequent collaborator Bumzu. Vernon and S. Coups are credited as co-lyricists. The track is alluring from beginning to end, and the first words rapper Wonwoo utters are, “You need to erase my memories // I’m poison.” The dance-R&B track is infused with thumping bass, haunting whispers courtesy of Jeonghan, and a hard-hitting hook.

Their cinematic music video is just as striking and fearful. According to the official video description, “‘Fear’ is an emotion many people encounter at least once in their lifetime. Seventeen explores fear as an emotion they face during their creative process. As the members search within for insight, the agony they endure help them develop one step further as artists.”

The members are seen amongst different backdrops and rooms coming together only a few times to perform the distinct choreography. Poison continues to consume their emotions all while a countdown clock ticks till the end.

Although “Fear” takes the group to new heights, there’s something for everyone on the rest of the album. The 13 members are split into three sub-units: a performance unit, vocal unit and hip-hop unit. Each of the sub-units gets a track to themselves highlighting the versatility of the group.

Songs like “Lie Again,” the performance sub-unit’s “24/7” and the vocal unit’s “Second Life” are mid-tempo R&B jams containing some of the group’s best vocal performances.

The hip-hop team takes center stage with “Back it up.” The track is the most addicting on the album as the unique production sounds like it was made for the runway.

If you’re missing their familiar upbeat and charming bops, tracks like “Let Me Hear You Say,” “Lucky” and “Snap Shoot” are the ones for you.

Seventeen is known as a self-producing idol group, and they have once again shared their stories and talents with the world as only they can. With An Ode, it’s definitely more potent and sophisticated this time around. As long as they stay authentic to themselves whether they feel “Fear” or a “Happy Ending,” then their fans will always follow along.

Listen to An Ode below.