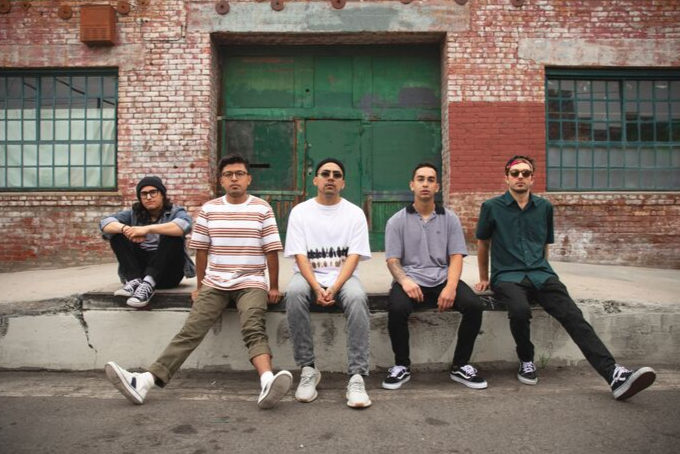 To just jump right in, can you talk a little bit about your history as a band? Can you tell us the story behind your name, 4th & Orange?

We don’t have much history and that’s what makes this journey so interesting. We’ve built great chemistry within the few months we’ve known each other, which means over time we will only become closer friends and stronger bandmates. DJ Flict and Nick Ferrer found these boys on Instagram hashtags, and we do not regret it! They are monsters.

The name is 4th and Orange because it is the main cross streets I live on. I didn’t grow up here my whole life, but I did happen to find out what life was really all about at this location. Working for money, paying rent and surviving the craziness of the world.

Let’s talk about your first two singles released under 4th & Orange: “No More Favors” and “Girl Next Door.”  They’re both such great summer jams. Were there any specific inspirations behind it?

I read a comment on our YouTube channel that said, “Summer in the form of music.” That meant so much because we all know everyone looks forward to the excitement of what the summer has to bring. So that’s our inspiration, at least for this album. The summer.

You were able to collaborate with DJ Flict and Mark Pelli, known for their work with Sublime with Rome and Magic! How did you guys come to work together?

I walked into a room full of talent for a Christmas party thrown by the head of Latium Artists, Chuck Chavez. He works closely to these type of folk for good reasons, and that’s when he saw an opportunity to ask them on the spot and in front of me if they’d want to produce some music for a band he was going to put together around my songs. They said yes and the rest is history.

“Girl Next Door” is such a great song for summer and that definitely comes across in the music video. Can you walk us through the day you shot the video?

It was an all-day thing. From morning to sundown. We showed up and met with Mike Garcia and his crew so we could go over the script since we never saw it before and it was cool to see that it followed the lyrics to the song. So verse by verse, he would show me facial expressions and over-exaggerated motions that actually played a huge role in making the story one to remember because it was funny and so serious at the same time. The last scene we did was the performance scene with the whole band playing in the living room and I’ve got to say that after completing that scene and watching it on the playback,  I was sure it was going to be a classic. Big thanks to Mike and his crew for capturing this movie.

You guys are originally from Long Beach, CA. How do you think that’s influenced your music? Are there any local groups that have had a big impact on you guys?

Long Beach is such a multi-cultural city so it’s helped me adapt to every genre of music, every type of food and every difference in each other as human beings. This has everything to do with the way I write and what I write about. Our music can be a little bit of everything, just like the city I grew up in.

Right off the bat, you would know I’m going to say Snoop Dogg. Hip-hop was everything to me as a kid growing up. Then I found punk rock/reggae from a band called Sublime. Bradley Nowell told the story of a kid with nothing special in his possession trying to become somebody and take life for what it is. That’s me. That’s us now. We will never copy, but we will take notes on the reasons great bands are great bands. Learn from the past to create a better future for yourself, end of story.

With the two singles out now, I’m hoping for an album next…can you hint to any projects that may be in the works?

We’ve recorded enough songs to put an album together and have even thrown around a bunch of titles for it. So it may come soon or it may take some time. We will never rush things that are going to happen when the time calls for it. Right now, we are focused on working the records we have out now to build more of a fan base and, of course, releasing a few more songs very soon – so just be on the lookout!

What about a tour? Do you have any plans for getting out on the road?

Our manager, Chuck Chavez, has been prepping us mentally and musically with rehearsals and a few out of town shows that way when it’s time to get on that bus we are ready. He speaks about the road all of the time so I think it’s safe to say that tour will come. I’m so excited about our next phase.

What are you most excited for in the next 12 months?

I’m most excited about the growth we should make in the next 12 months. Constantly being in the studio, rehearsals, and stage settings will sharpen our skills tremendously. I can’t wait to look back at day one on day 365 and realize we are a force to be reckoned with because of how focused we were over the year. Then we will repeat for the next 30 years!

I’d love everyone to check out our new song that dropped mid-September. It’s a great addition to the songs we have now and I’d love for everyone to support us in any way because as a new band from Southern California, we need it! Thanks for the interview guys. We’re here for you anytime.