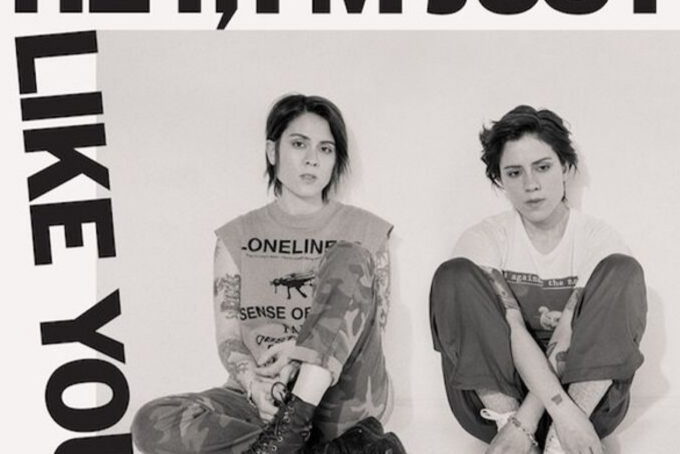 Listening to the latest Tegan and Sara album, Hey, I’m Just Like You feels like coming home.

Maybe that was their intent.

As soon as the record begins, there’s something cozy about the music, like meeting up with childhood best friends or reading under tungsten tinted fairy lights.

Tegan and Sara have been around for a long time — longer than most bands, anyways. It’s not a stretch to say that people have grown up with them. Even if your introduction to the Canadian duo was through their smash hit “Closer,” you’ve been around for almost a decade, and you probably have some memories tied to their very specific brand of synth-pop. And maybe that’s where the nostalgia is coming from.

Synth-pop, of course, is a genre that’s been done to death by now. What used to be refreshing to listen to has now fallen absolutely flat. It feels like every new band these days is some kind of brand of “synth-pop,” no doubt due to the success of bands like The 1975 and CHVRCHES. But just because everyone is making this kind of music, doesn’t mean everyone is good at making this kind of music — and that’s where Tegan and Sara stand out.

First and foremost, this album shows that the sisters Quin have honed their songwriting abilities to a fine, fine point.

They are the modern masters of this genre and are able to not only make exceptionally catchy and smooth music but are also able to pair that with lyricism that walks a fine line between “admirably raw” and “maybe too much.” It’s incredible how you can listen to a Tegan and Sara song as a fun, dancey pop song, or as the confessional it really is, and either way, it feels like the 100 percent correct way to hear it because both sides of that experience are both so fully realized. There’s a real versatility to their music that a lot of modern artists are missing. Tegan and Sara are not one dimensional, and neither are their songs.

Secondly, there’s a level of authenticity to their brand of synth-pop that other artists can’t quite grasp, probably because they weren’t even alive in the 80s when the genre was birthed. But as children of the 80s, Tegan and Sara are able to write music that doesn’t sound like an imitation (or worse, a parody) of the genre. Almost every track from Hey, I’m Just Like You could be put in a John Hughes movie, scoring the school dance or the final, closing shot.

Where this kind of nostalgia doesn’t work for everyone, it feels perfect coming from Tegan and Sara, who are, no doubt, at a point of reflection in their careers — which is not only reflected in all their lyricism, but also in the more vulnerable and toned town acoustic tracks like “Please Help Me” or “Hello I’m Right Here.”

The standout track from this album might be its final one, “All I Have to Give the World is Me,” a more stripped-down track that fully shows off the vocal range of the sisters (in general, this album really shows off Tegan’s lower range, while Sara gets to take the big, wailing notes), and their uncanny ability to wind haunting harmonies around each other.

Overall, Hey, I’m Just Like You is a great album and doesn’t disappoint for Tegan and Sara fans new, or old. It’s reflective, mature, and most importantly, has excellent music on it, that will likely be in heavy rotation amongst too-cool-for-school indie kids for years to come.