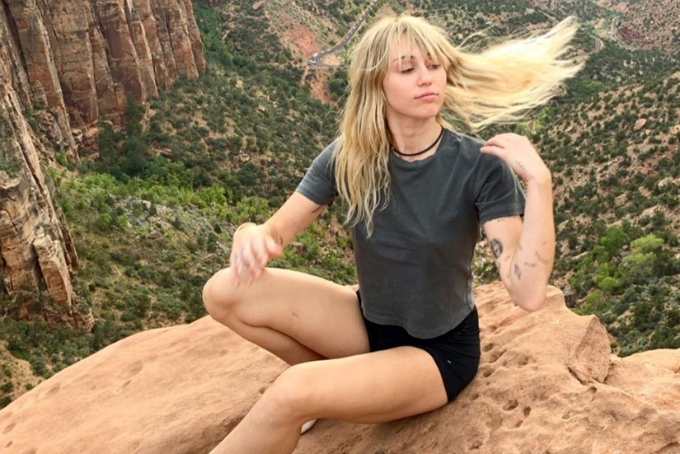 Miley Cyrus is celebrating the 6-year anniversary of her triple platinum album, Bangerz, in the most Miley way possible! The pop star posted several photos and videos from the Bangerz era to her Instagram in celebration of the LP’s release six years ago on October 4, 2013.

Miley also posted a video featuring some of her heavily talked about performance of “We Can’t Stop” at the 2013 MTV Video Music Awards. “I never thought they’d talk for 6 years,” she wrote. “#FuckinBangerz #YouStillTalkin.”

Cyrus released the album when she was just shy of 21 years old. Despite the fact that the album’s lyrics discuss drinking, smoking, and partying extensively, she commented in one of the social media posts that she wasn’t allowed to drink. She captioned the photo: “Bangerz is 6 years old. Wasn’t even 21 when I dropped this record ! Couldn’t drink but fuckkkkk I partied!”

The second video she posted featured highlights from the photoshoot for the album cover. “6 years ago my life changed forever,” she wrote alongside a banana emoji.

The 26-year-old “Slide Away” singer recently revealed that she’s back in the studio, hopefully working on another album. She released an EP, SHE IS COMING over the summer, which spawned the catchy single “Mother’s Daughter.” After announcing her separation and split from ex-husband Liam Hemsworth, Cyrus released “Slide Away,” which captured her side of the split.

On her Twitter page, Cyrus posted: “Back in the yo! I am so fucking inspired right now.” Along with it, she shared a picture of herself in a recording studio.

Back in the yo! I am so fucking inspired right now 🦋 🌊 pic.twitter.com/Z0loOIFtmM

Bangerz definitely changed the course of Cyrus’s music career. Her most successful tracks to date, “We Can’t Stop” and “Wrecking Ball,” were both singles from the album. The Bangerz Tour made stops in the North and South America, Europe, Australia and New Zealand and grossed $62.9 million.