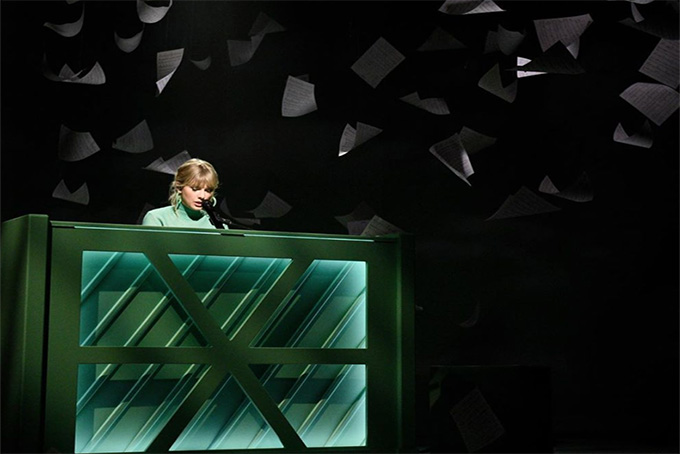 Nearly a decade after first performing on the show, Taylor Swift made an appearance on Saturday Night Live this weekend to belt out two songs from her seventh album, Lover, which dropped in August.

Draped from head-to-toe in neon green, the songstress performed the dreamy title track on a lime green stage, playing the tune on a piano, a departure from the track’s signature guitar strumming.

Swift pulled out her breathy vocals to perform the romantic track, featuring a waterfall of music pages cascading behind her and her lit-up piano. “Lover” is one of Swift’s most intimate singles, giving a glimpse into her private relationship with long-term boyfriend Joe Alwyn. She has said herself that “Lover” is the song she’s most proud of, which clearly shows when you see how much she glows when performing it. She was alone on the SNL stage, showing her vulnerable side, which is clearly madly in love.

For her second performance, Swift switched  to one of her blazers she has been sporting lately (possibly a reference to her patriarchy-smashing track “The Man“?) and stood on a foggy stage to perform her slow jam “False God.”

The sultry track gives a nod to New York City, while also featuring an iconic saxophone solo, performed by Lenny Pickett, who has been in the SNL band since 1985 (yes, that’s four years before Swift was born). It’s a much more relaxed song than “Lover” featuring a slow beat and a sleek backtrack. It’s a fan favorite for it’s complex themes of believing in love more than other things in life, even if it’s fleeting. Swift flawlessly sang the track on the dimly-lit stage, which looked exactly how the song sounds, as if it came straight out of a smokey night club in the ’80s.

Even though Taylor chose a lesser-known track to perform (justice for “Cruel Summer,” please!) she showed command of the SNL stage, as she always does. Her mature sound has grown to match the late-night club vibes of an after-hours variety show, and we hope she’ll be back at Rockefeller Center soon.