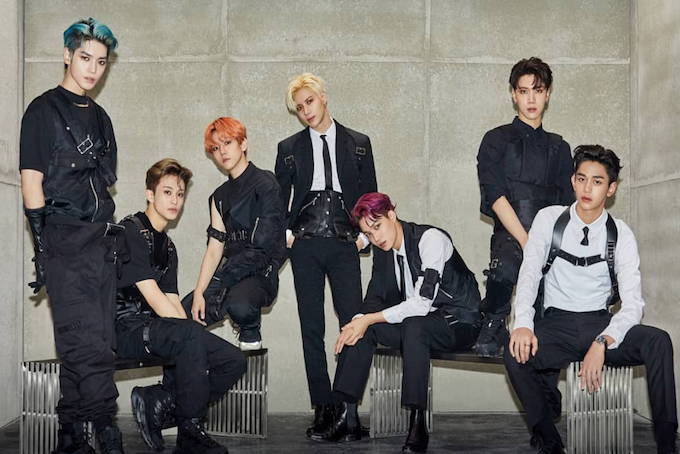 K-pop group SuperM have released their highly anticipated debut EP, SuperM — The 1st Mini Album. The newly formed supergroup was unveiled back in August by SM Entertainment and Capitol Records.

The seven members come from SM Entertainment’s established roster of acts and include Mark and Taeyong of NCT-127, Taemin of SHINee, Baekhyun and Kai of EXO, and Ten and Lucas of WayV.

The “Avengers of K-pop” have officially arrived on the scene with an album containing five tracks, including the dynamic title single, “Jopping.”

“Jopping” is a compound of the words “jumping” and “popping” — which is exactly what the electro-pop jam will have you doing. The blockbuster music video features the members showcasing their talents in areas such as the desert and inside a coliseum, complete with flashy helicopter and motorcycle sequences. Although the members share their rap parts and sing melodically throughout, the high intensity choreography and gladiator-like showdown’s the ultimate standout.

By releasing “Jopping” as the title single, it’s clearer than ever that the group will focus on intense performances. The music’s only a part of the SuperM formula.

“I Can’t Stand the Rain” is the only B-side on the album that contains all members. The song has a similar intensity to the title track. The members sing and rap their own verses over a dramatic drum instrumental. Taemin and Baekhyun are able to show off their excellent vocals and falsettos.

The last three songs are unit tracks, splitting up the septet. “2 Fast” is a mid-tempo love song performed by Baekhyun, Lucas, Taemin and Mark. “Super Car” is another track that’s fitting the superhero or Avengers theme of the group’s title track, but a little more salacious this time around. This song has an even distribution between Taeyong and Mark’s hard-hitting verses, along with Baekhyun, Ten and Taemin’s smooth vocals. “Move vroom // Like a black car whatever rhythm I can ride // Stronger vroom at a different level // I can’t even handle myself,” they sing together in English and Korean.

Taeyong co-wrote the track “No Manners” featuring Taemin, Kai and Ten. Its unique and mysterious sound, combined with the less-than-amicable lyrics, make it the ultimate breakup anthem and one of the best tracks on the album.

The supergroup’s first project is exactly what was expected from them, as all the songs are high-energy and dance-oriented. The album’s cohesive, but could feature a few of the members a bit more (particularly Ten, Lucas and Kai). Hopefully the group will be able to showcase their individual talents on their upcoming tour as they’re marketed as a performance group.

SuperM’s set to embark on their We are the Future tour starting November 11 in Fort Worth. The group’s playing ten shows across North America with more dates to be announced soon. Stream SuperM’s debut EP now: