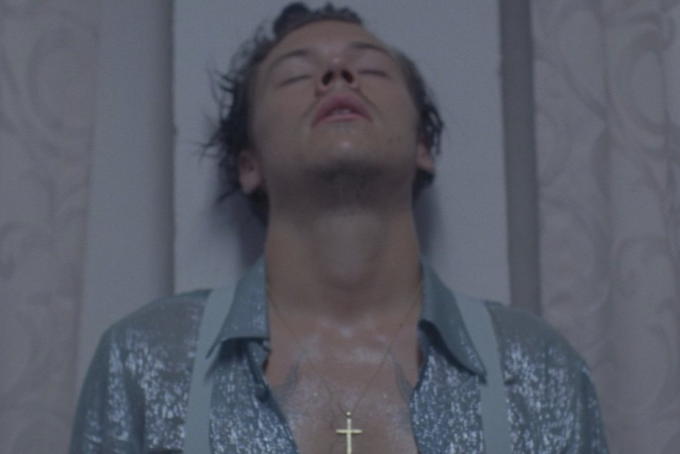 The beginning of a new era is here. That’s right. Harry Styles just dropped his first single off of his sophomore LP, which many fans are assuming will be titled Do You Know Who You Are? To say we are absolutely losing our minds would be a complete understatement — yet, here we are.

Leading up to the single drop, Styles teased fans with an incredibly subtle announcement that only long-time followers could decode. In fact, we almost missed it ourselves. In cities all over the globe, fans found giant posters with the phrase, “Do you know who you are,” in a classic Leonard Cohen font, which writer Rob Sheffield didn’t hesitate to point out.

the Leonard Cohen font is such a power move pic.twitter.com/ZSa1se9Gus

In addition to the presumed album title, Styles threw in a vague group of letters, reading “TPWK.” That’s when dedicated Harry Styles fans knew. This abbreviation stands for Harry’s coined phrase, “Treat people with kindness.” A day later, on October 10, the clues continued. Fans found a website that begged the cryptic question once again, and upon entering your name, you’ll immediately receive a heartfelt message from the man himself.

You can understand why we’ve been left in quite a frenzy these past two days. However, relief has come in the form of Harry Styles’ latest single, “Lights Up,” and we’re utterly speechless. Nevertheless, we’ll try to form some coherent thoughts to describe this, oh so, lovely song.

To kick it off, we must preface that this is not a direct sequel to the “Sign of the Times” singer’s debut solo album. Instead, “Lights Up” stands alone with an interesting, yet refreshing twist on the traditional pop song, adding in an almost-R&B essence (If one were particularly bold, they might say Styles’ voice sounds a bit like former bandmate Zayn Malik upon first listen). True to Harry Styles himself, the song is incredibly honest and inspirational. We’d expect nothing less.

LIGHTS UP. Out now.

Before Harry even began singing the first verse, we were already bobbing our heads along to the guitar melody. He croons, “What do you mean? // I’m sorry by the way, // I’m never coming back down, // Can’t you see, // I could but wouldn’t stay, // I wouldn’t put it like that.” And just before the chorus hits, Styles asks once again — this time verbally — “Do you know who you are?”

Honestly, Harry, no — we definitely don’t, but after listening to this song, we’re more inclined to find out. The song’s message is an important one, telling the story of someone finally coming to terms with who they are and never again turning away from it, no matter how bright the lights are in front of you.

Styles makes his listeners feel free as he lets us all know, “Shine, // Step into the light, // It’s so bright sometimes, // I’m not ever going back.”

We’ve all been in a place that feels lonely and dark at one point or another, and Styles reminds us that it’s OK to feel like this even when there’s so much good happening around you. But, he also lets you know that once you “step into the light,” you’ll finally be completely you.

“Lights Up” cuts through the noise and once again reaffirms Harry Styles is a legend in the making. We have our hopes set pretty high for this upcoming album; not to be too forward-thinking, but we have a feeling it will be pretty phenomenal.

And if the single alone wasn’t enough for you — it certainly wasn’t for us — watch the “Lights Up” music video below!