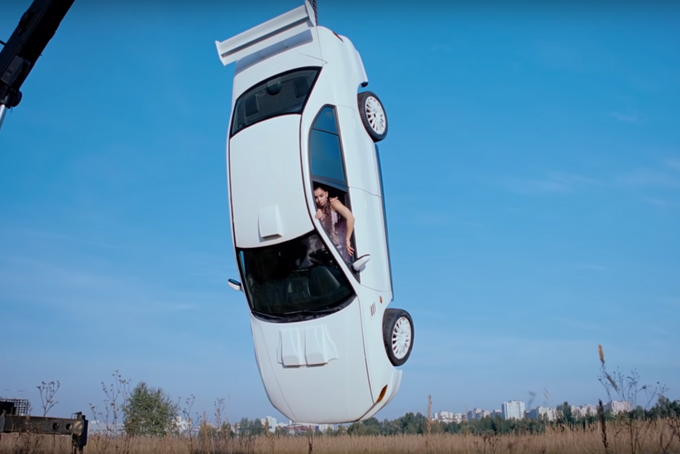 Charli XCX showed her loyal “Angels” that she values their opinions by making a music video for the fan-favorite song from her recently released album, Charli. The video for “White Mercedes” may be simple, but that doesn’t take away from how visually stunning it is.

The video begins with a striking image of Charli sitting in a white car, which hangs from a crane. It may not be a white Mercedes, but that quirkiness adds to the charm of the video. Charli is wearing a beautiful and extravagant pink chiffon dress paired with harsh knee-high black boots, in typical Charli fashion.

In the next shot, we can now see Charli is in a large field with pink balloons dotting the horizon, matching her dress adding to the aesthetic. The video continues, showcasing Charli’s personality while she sings the lyrics. We see her standing on top of a white pick-up truck, another funny nod to the fact that none of the white cars in the video are actually Mercedes. We then see that white truck driving over the original white car that was hanging from a crane but with no Charli inside this time.

The video continues with a bombarding of beautiful visuals, such as an overhead shot of Charli in another over-the-top dress being circled by the white truck. The last “means of transportation” we see in the “White Mercedes” video is not the expected sports car, but a white horse that Charli is shown petting but not riding.

As the sky grows darker, the visuals become more epic. We see the car that Charli was originally hanging in, being set on fire. There are now fireworks going off in the distance. The video becomes more and more dramatic, with shorter shots of Charli singing her heart out and the white horse running through the field.

The video ends with a memorable shot of Charli standing in front of the original car, which is completely up in flames. “White Mercedes” is about a relationship where Charli is constantly trying to be good enough for the other person. With lyrics like “All I know is I don’t deserve you,” it’s clear that she doesn’t feel worthy enough to be happy. The music video reflects this in a creative way, showcasing the destruction of a car and Charli’s build-up of emotions.

Charli XCX’s visuals never disappoint, and “White Mercedes” proves that. This is her fourth video from the album Charli, so be sure to keep an eye out for what’s next!