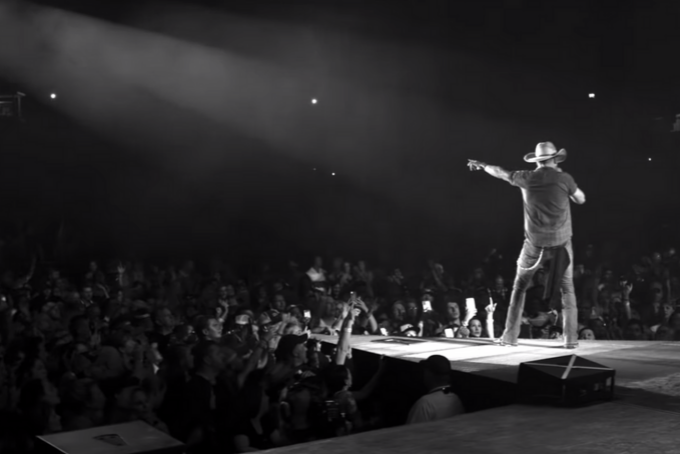 “We Back” with a review for the new show-stopping Jason Aldean music video. Fans know that Jason Aldean is BACK with his newest single “We Back,” which hit country radio early in September. Lucky for us, the “We Back” music video came out soon after the song’s release. The track will be featured on Aldean’s newest album which is set to release in November. Before we get into our review of the new music video, check out Aldean’s post to see some awesome fan reactions to the new video!

Anybody seen the new “We Back” music video?? Let me know ur thoughts👇🏼

While we all love Jason Aldean’s music videos, this one is unique in that it was filmed live on tour. The live filming showcases Aldean’s talent while also showcasing the talent of his videographer. The video further uses many different filming aspects like the popular fish-eye lens, camera tricks and wide panels to give the viewers the look and feel of being on stage. Aldean says that fans, “feel like they are on stage with us, which is something I’ve never really seen pulled off like this before.”

Most of the time, music videos that are shot live usually aren’t as interactive as Aldean’s. In this case, the music video creates a unique experience by pulling the viewer onstage. Some of the most breathtaking footage is of the full at which amphitheater Aldean performed. We also love the close-ups of Aldean and his band.

Aldean’s ninth studio album, 9, drops in November, so luckily, there isn’t too much of a wait for fans. Aldean is also launching his We Back tour in January in Columbia, South Carolina. Fans can also see Morgan Wallen, Riley Green and Dee Jay Silver join Aldean on tour in 2020.

If you’re anything like us, we will be patiently waiting for the new music and tour to kick off.

Tickets for Jason’s #WeBackTour are on sale today at 10am local time for select cities! Visit https://t.co/n8BNLkhotR for tickets and additional details.

If you haven’t yet, check out Jason Aldean’s music video for his newest single “We Back” here: