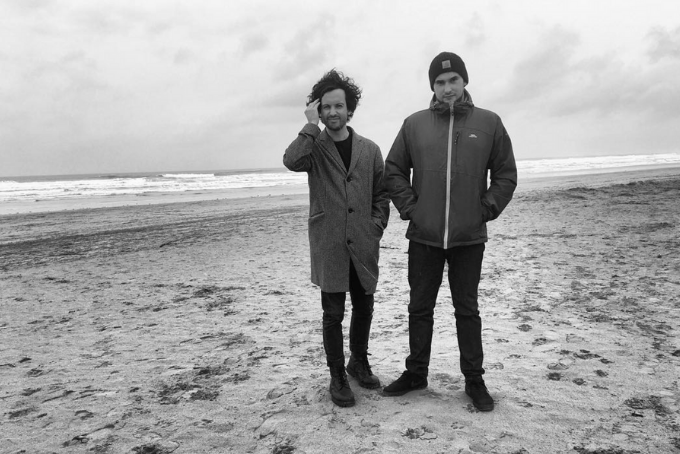 As the month of October rolls in, and spooky season kicks into full gear, the need for ambient, melancholic and downright gothic music is high.

And though staples like The Cure, Bauhaus and Souxie and the Banshees are always excellent to have on hand, sometimes, fresh blood is needed in the scene.

Enter, Yard Arms. The Bristol duo has been making waves since 2018 — securing spots in BBC Music Introducing and building a loyal fanbase in their hometown and beyond. As they get ready to release their new EP A Glossary of Broken Humans & Beating Hearts, which will drop Nov. 1, they’re poised to make moody cool again. Or at least, make goth rock something that your friends will be familiar with.

Let’s get this out of the way — I was hooked on your sound from the opening track. You’re like all the best parts of 80s goth rock and 2000s garage revival. But nobody really cares what I have to say about you. How would you describe your sound for someone who’s just discovered you?

That means a lot. Thank you so much! We’re definitely getting a lot of comparisons to both of those eras, and we are not unhappy about it! It’s really not our place to dictate to people what we sound like. However, we often drop the journalistic one-liner jargon of “transatlantic melancholic pop.”

Now, I’m American, but from what my expert Googling has told me, Bristol has got a pretty impressive and diverse music scene. How has your hometown inspired your work?

Bristol has always had it’s own artistic counterculture and that’s something that has kept us inspired during our time writing and living here. It’s forever been a melting pot of genres and a community that looks after one another’s creativity. There’s an intrinsic camaraderie in the city that we’re humbled to be a part of.

It’s been about a year since your last EP, Maiden, was released. How has Yard Arms changed (and grown) since then?

The songs on Maiden were written and recorded before we had really birthed the idea of Yard Arms as a project. That EP evolved more out of creative necessity and personal catharsis rather than other motives. Once we had finished with that record, we had stumbled upon a sound that we’d been seeking to produce for many years so we acted on it fast and kept writing.

Those sessions, ultimately, are what became this new release. During that process, we definitely gained a better idea of what this project needed to sound and look like. We improved as a live band and our relationship with our producer in the studio took us to new challenges and improved heights. The whole process has become more fluid and the honesty of what we’re doing is continually present. We know that if we made a Maiden Part II, we would just become so stagnant, and quickly, we have no purpose if we don’t want this project to grow and move forward.

Absolute pleasure to play for you last night @sofarsoundsbristol @sofarsounds @thefloristbristol, thank you for such a great evening! 🖤 #sofarsounds #bristol

I think our favourite is probably the same. We’ve not had that Smiths comparison for a while, but I had a real phase in my teens where I just learned their catalogue inside out and that musical and lyrical juxtaposition is something I always try and use in our tunes.

“Heavy Silences” was an important track to us for many reasons, it was the last one we wrote for the release and we weren’t playing it live so it felt like there was some secrecy behind it prior to release. The sound on that song is something we’ve strived for, for some time, and it definitely represents a heap of artists we adored growing up. It’s nostalgia-driven for sure.

I suppose I could hazard a guess, but I’d prefer to hear it straight from you. What are some of your biggest influences as musicians, musical or otherwise?

It’s such a diverse mix of things from so many angles, but if I narrow it down to mutual musical direct influences on our sound. There are artists like Death Cab For Cutie, Manchester Orchestra, American Football, The National, The Cure, Tears For Fears, Radiohead, etc. But all of that seems so pigeon-holing when, day-to-day, our listening habits are an erratic experimental shuffling of just about everything.

One thing I really appreciate about you as a band — besides the music, obviously — is how cohesive and well thought out your aesthetic is. Was that intentional, and do you think that the visuals are important to your art?

We’ve always grown up being attracted to bands with such strong and coherent visuals. From an early age, I think we both still remember the first time we saw artists like Marilyn Manson or The Prodigy on TV. It’s those images that are so important as a vehicle for the music as well. As artists, we do believe that getting the aesthetic right for Yard Arms is important, yes.

While there isn’t an overabundance of bands like you out there, it definitely feels like it’s very trendy to be “melancholic” right now. What makes Yard Arms different from all that other fodder?

We were melancholic before it was trendy, man. Like I always say, we’re not trying to reinvent the wheel. I think melancholic is just something we get labeled with because we dress in black and there’s like a ton of reverb and we’re singing about our feelings. It’s a really easy box to just fit us in. At the end of the day, what sets us apart in melancholia planet is our songs.

And the question I ask all bands: why should the world care about Yard Arms?

So you can tell all your pals, “I remember Yard Arms before they were…”