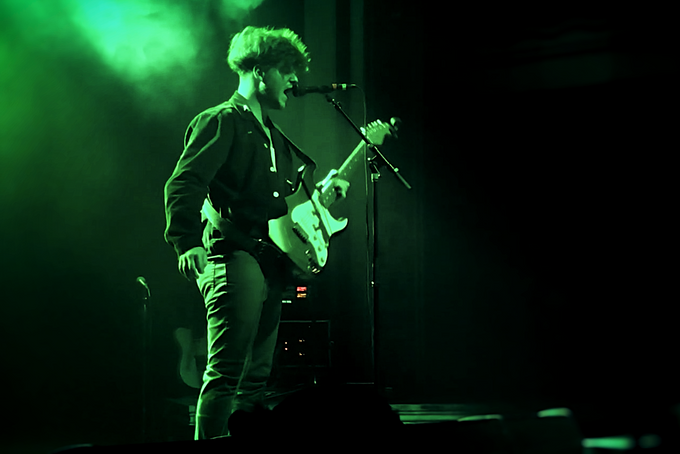 Newcomer Yoshi Flower is at the dawn of a promising music career and the Detroit artist is taking it in stride while blossoming into his own as a performer. As the opening act for Harlem-based rapper Skizzy Mars on the Free Skizzy Mars Tour, Yoshi hit the stage on opening night — an October 12 show at famed NYC nightclub Webster Hall — for a dynamic set that rocked the venue.

Marching onto the stage with unflinching confidence, Yoshi plummeted straight into the music and made the most of his 30-minute set. There was no intro, no ostentatious light display, no unnecessary call to the audience — just a musician, his guitar, a microphone and an array of hues as green as the Super Mario character he shares a name with.

Yoshi commands his talent in the same unapologetic manner that his music defies the laws of genres or classifications. The setlist includes tracks like “Addicted,” “Movies” and “Brown Paper Bag,” the latter of which featured bass-heavy verses that rattled the floor as the wail of his electric guitar thundered through the venue. He also cheekily acknowledged the Lana Del Rey comparisons by performing a cover of “Video Games,” which the audience instinctively sang word for word.

Yoshi’s interaction with the audience heightened as the show progressed, going so far as to humorously restarting a song because the crowd wasn’t “lit” enough for his liking. Surely enough, the atmosphere bloomed into an energetic display of compliance. He also partook in the ever so rockstar splash-and-toss, a.k.a. splashing the audience with his water before tossing the whole bottle for one lucky fan to wield in victory.

As a newcomer, Yoshi is realizing how tedious life on the road can be and he made the genuine confession between tracks. He teasingly mentioned that he gets bored on tour and beckoned fans to “slide in the DMs” to alleviate the monotony of his day-to-day agenda. After all, the best musicians tend to be the most transparent.

You can catch Yoshi Flower on tour with Skizzy Mars until November 21. Tickets and dates can be found here. You can listen to his latest mixtape, Peer Pleasure, below.