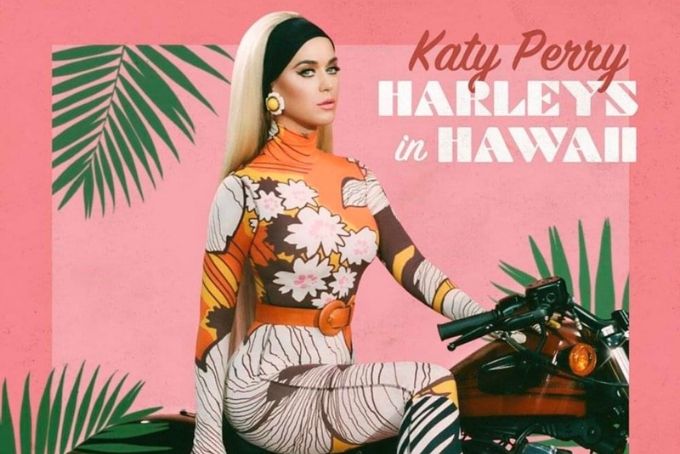 Katy Perry takes us on a romantic getaway in her newest single “Harleys in Hawaii,” a sultry song with a beautiful video to match. The track’s the third single from her upcoming project that has no title or release date. “Harleys in Hawaii” joins “Small Talk” and “Never Really Over” in a collection of songs that represent Katy’s romantic journey in the last couple of years.

Ever since fans saw paparazzi shots of Katy on a beach shooting the video with striking, long blonde hair, they’ve been excited about the (then unknown) song. When it was confirmed that the photos were for a song called “Harleys in Hawaii,” fans were ecstatic.

The song’s less upbeat and more seductive than the other singles released so far. Katy’s voice is smooth and seductive as she sings about the weekend trip with her lover to Hawaii that inspired the song. As Katy sings, she paints such a clear picture of the beautiful skies and beaches of Hawaii that anyone can feel like they’re on vacation right alongside her.

Although releasing a song with such strong summer vibes in October’s an interesting choice, “Harleys in Hawaii” brings us back to those sunny months we recently said goodbye to. It helps that Katy and her motorcycle beau take us on adventures throughout the music video. From fringe jackets blowing in the wind to the mouth-watering sight of neon orange hot Cheetos, the “Harleys in Hawaii” video has an abundance of visually pleasing moments.

It might be fall, but listening to Katy Perry’s newest track will transport you right back to those hot July nights we start to miss as the temperature drops. We get a dark and alluring sound from Katy that we haven’t heard in a while, as well as romantic lyrics with no reservations. Unlike the breakup aspect of “Small Talk” and “Never Really Over,” Katy’s gushing over a current romantic partner that seems to be the one. “Harleys in Hawaii” shows us that if there’s an upcoming album coming from Katy Perry, we’re in for a wild ride. Make sure to watch the video now!