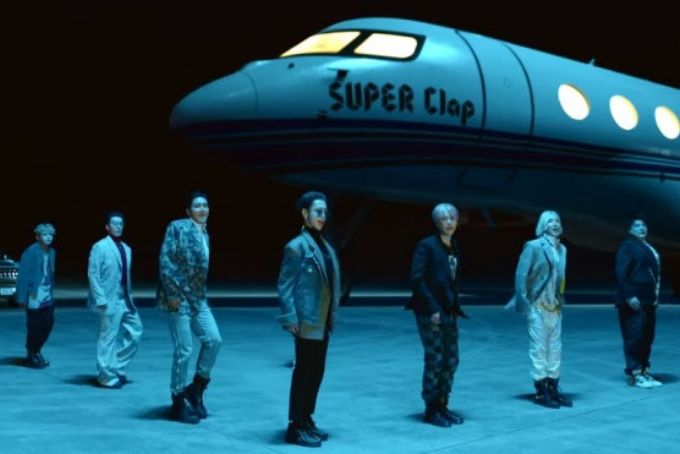 The song’s a high-energy dance track, featuring brass instrumentals. The track has a strong funk feel and fitting to the name, the song’s led by a clap beat. It’s a message to listeners to take a step back, let loose and have fun. “Let’s shake this world up // Let your body move to the rhythm,” members Ryeowook and Kyuhyun proclaim in the chorus. The bridge of the track features a sleek synth breakdown before bursting back into the upbeat chorus.

The video shows the members breaking free from a life in the office to have some fun. Kyuhyun is seen at the head of a dinner party surrounded by bubbles, while Eunhyuk and Siwon play a hilariously intense game of tennis. Members Shindong and Leetuk claim the spotlight with their dance machine competition in an arcade.

The video uses a mix of sped up and slowed down shots, adding frantic excitement to what the members are doing throughout the video. The dance shots of the group are mostly filmed at regular speed, giving viewers a chance to see the funky and smooth choreography. The transition to the bridge is a cool sequence of mixed speeds set against dark blue lighting. The video gives us a pause before jumping into the finale, with the group dancing in an airfield with a private jet behind them. The scene’s a contrast from the bright color scheme used in the rest of the video and brings an element of sleekness for the finish.

“SUPER Clap” is a fun and electrifying video, showcasing that Super Junior has no plans of slowing down and are excited for listeners to join them for the ride.

Check out the video for “SUPER Clap” below!