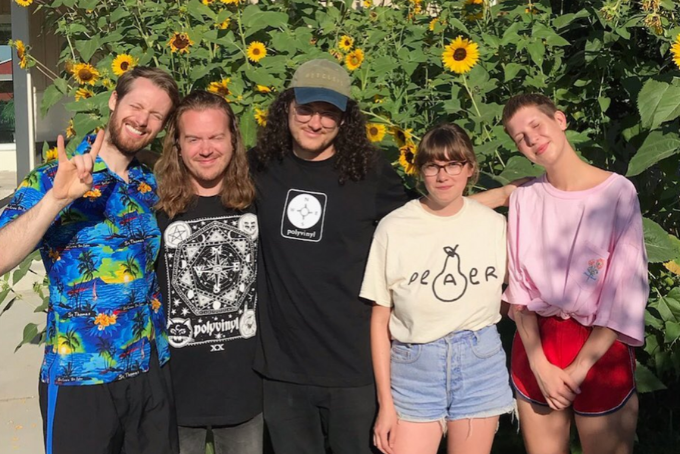 Well, we guess this is growing up.

With band members in their late 20s and early 30s, things are just different. With a move from Seattle to Milwaukee, and their new album Four of Arrows coming out, there’s been a lot of change for Great Grandpa — a change that’s pretty clearly reflected in their new music. More somber, more thoughtful and all-around heavier than their earlier fares, Great Grandpa is growing up, and we’re lucky enough to come along for the ride.

Soundigest got to chat with bassist Carrie Goodwin to discuss the new EP, the pitfalls of being from Seattle, and the importance of a reasonable cost of living.

First and foremost, let’s talk about your new album, Four of Arrows, which dropped on October 25. This album touches on isolation and introspection — can you elaborate on that?

Throughout the writing and release of Plastic Cough, the band spent a lot of time together. We spent a lot of time on the road doing back-to-back, multi-month tours with very little alone time just due to the demands of low-budget touring. Things changed when I decided to go to graduate school and got into an awesome nursing program at Marquette University in Milwaukee. Pat was so supportive and agreed to move with me to Milwaukee despite neither of us having been there before, and it was a really rough adjustment. We went from constantly being surrounded by people to living in a brand-new city, thousands of miles away, where we didn’t know a single person. We spent a lot of time alone at first, particularly Pat, who was working remotely from our apartment. The experience brought about a very different state of mind, where suddenly we had the time and space to reflect on and explore emotions that had been building throughout the chaos of the past few years.

I’m also seeing that you wrote a lot of this record while in the Midwest, which I think is pretty unusual. Most of the time artists go to big cities to get a better perspective. How has the Midwest informed your songwriting? And how is that different from your hometown of Seattle?

Milwaukee is a truly amazing city. One of the biggest positive changes I’ve noticed is that the cost of living here is way, way lower than in Seattle, which has seen astronomic increases in the past decade. The ability to afford to live in a city has made a huge difference. Pat and I are able to rent a 2-bedroom apartment in an extremely walkable neighborhood for less than half of what we paid for a studio in the outskirts of Seattle. The result is that, for the first time ever, we have a dedicated workspace to write music and record demos.

We also are better able to take on financial hardships, such as touring and recording costs, while still maintaining a stable place to live. The discussion around cost of living increases in cities and how it affects artists is extremely important, and I don’t think it is talked about enough.

Speaking of Seattle, that’s definitely a hometown with some pedigree. Do you ever feel like there are certain expectations or preconceived notions people have about you since you’re from there?

I think our music gets called “grunge” a lot more frequently than it would if we were not from Seattle. Beyond that, I do think Seattle has a reputation as being a very cool and musical city — which it is. But living outside of Seattle has broadened my perspective a little and shown me that there is truly beautiful and interesting art being made in every corner of the world.

Tonight’s your chance to hear Four of Arrows a week before the release! We’ll be hanging at @lifeonmarsseattle from 8-11 and jamming the new album on vinyl, come get a drink and hear some new tunes! 📷: @ukulelepunk

There’s a lot of terms associated with your music, but the one I keep coming back to for your newest album is definitely emo — like old school, 1980s emo. How would you describe this new album? Or, how would you like this album to be described?

Honestly, we don’t even know what words to use to describe our music. Four of Arrows has a huge breadth of influences and stylistic choices that range from “emo” to folk, pop, country, progressive rock, classical, grunge, experimental and more niche labels that I probably don’t even know. We don’t really care what categories people use to describe the album — we just don’t want to be pigeonholed into one box. We would love for people to go into the album with an open mind and just experience it for what it is.

In general — and maybe it’s just me — there’s something heavier and more mature about Four of Arrows than your previous work. Aside from the time alone, was there anything else that caused this sort of melancholic detour? How do you feel you’ve evolved since Plastic Cough?

I think another major factor is that we are all getting older and growing into ourselves a bit more. We now have several members in their 30s and the rest in our mid to late 20s, and hitting these milestones naturally prompts some introspection.

Four of Arrows reflects an attempt to understand ourselves and to make sense of our experiences as we continue to grow. I also think getting a little older has given us the confidence to make the music that we truly want to make, and in that way, the album feels more honest and sincere than Plastic Cough.

Doing both my due diligence in reading about you and listening to this new record, there’s also a lot more vulnerability to this record. Was that scary to open up? One could argue that the current climate isn’t really friendly to “sensitive” and “vulnerable,” but you did it anyway. Why did you feel it was important to do that now?

It is always scary to be vulnerable, but we have learned that it is the only way you can truly connect with other people. Creating Plastic Cough was difficult because we really didn’t know what kind of music we were trying to make — it was a time when we were stepping into the spotlight for the first time and introducing ourselves to the world.

You can hear hints of what’s to come on a few of the songs, like “All Things Must Behave / Eternal Friend,” but we were really just trying out a lot of different ideas and finding what felt right to us. Four of Arrows was a culmination of all the years we spent experimenting as a band and it felt like everything just sort of clicked into place. It is obvious when a band is making music that is honest and sincere, and that was our only real goal when recording the new album.

Truly beautiful Four of Arrows feature and 5/5 review in the November issue of @upsetmagazine. Order link in bio 🌟

You’ve been a band for about five years now. What would you say is the main difference between your first record — or, EP, I guess if we’re getting technical — Can Opener and Four of Arrows? How do you think you’ve grown in that time?

It’s funny because Can Opener was recorded just a month or two after Great Grandpa was born. We had played only a couple of shows and didn’t even have our full lineup yet. I had never played the bass before starting Great Grandpa, so I was literally learning the instrument while recording in the studio. Most of the lyrics were still being finalized in the studio as well.

It was our first and very early attempt at learning how to work together as a band, and I really love to listen to it sometimes to remember how far we’ve come in that respect. Interestingly, we did remake a Can Opener song for Four of Arrows: “Mostly Here.” It has always been a fan-favorite and the way we play it has changed dramatically over the years, so we wanted a recording that reflects the true ethos of that song. I was surprised how well it fits in with the other songs on Four of Arrows, since it was written about five years apart.

Though you’ve steadily gotten more popular, there’s still very much a DIY ethos and aesthetic to your work that I admire. Is that intentional? Or are you hoping to get more theatrical and grandiose as you keep gaining momentum?

Four of Arrows marked the first time that we had the time and resources to make the kind of album we wanted to make. I imagine it’ll be the same in the future — we wouldn’t maximize production just for the sake of it. We also have two audio engineers in the band who I imagine will always want to be involved in the production in some capacity, so the DIY is here to stay.

And finally, my favorite, self-important music journalist question that I love to ask everyone: why should anyone care about Great Grandpa?

It’s ok if they don’t. We made an album that we are really proud of and hope that some people are able to connect to it in a meaningful way. For us, that’s what music is all about.